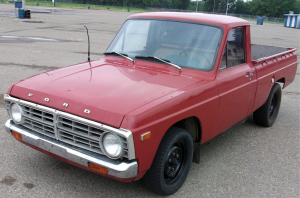 So the truth is, most of the Latinos I know who grew up in the U.S. speak English as their dominant language, either because their parents or grandparents spoke Spanish, or even because they wanted to learn the langage as adults and studied abroad in Spain college. The point is, English is their first language and their Spanish may not be, well, perfect. This certainly is the case for me.

What happens, then, is that Spanglish enters into their vocabulary to fill in the gaps. Of course, I consider Spanglish to be rather legitimate, given that cultures — whatever they may be — never stay “pure” for very long. Such is the case with Spanglish, which is the inevitable outcome of two cultures co-existing for so long.

So recently a friend of mine asked me the question: Why isn’t troca in the dictionary?

And I think it’s a legitimate question. Isn’t language a means to communicate our reality? And if our reality is that “troca” is a more recognizable term than “camioneta,” it would seem to follow that this word should be in the dictionary. But it’s not, and that’s kind of sad.

It seems like we put these unrealistic standards on ourselves, that there is some level of “purity” that can be achieved in language that will give us more authenticity or legitimacy, if only we could get there. But the truth is, we never will. It doesn’t matter how many years of Spanish you take, if you’re anything like me or my friends, your brain was hard-wired for English long ago. This, despite the fact that my brain has been re-wired for Spanglish in recent years.

It’s not like I have any power to rewrite the dictionary, or the authority to dictate what should be considered “proper” Spanish, but if it were up to me, troca would be in there. Along with some other neat Spanglish words, like parquear, sandwiche, chores, and the like.

I know there are a lot of people out there who would disagree with me, and what I would say to them is, let’s figure out a way to teach Latinos proper Spanish in the U.S. so that we can all understand the difference between Spanglish and Spanish. Until then, I’m going to continue to use these words as part of my cultural capital and am thus guaranteed to be more easily understood by people I meet on the street — provided we’re not talking the streets of Madrid, of course.