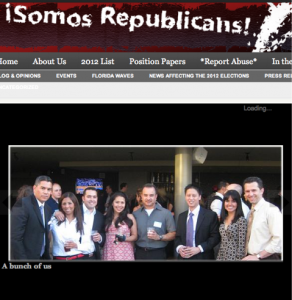 The conservative group that sprang out of Arizona, Somos Republicans, seems to be splintering as its founder, Dee Dee Garcia-Blase, notes big changes in the group, and former Executive Vice President Bob Quasius resigned last week. Quasius and others are forming the Cafe Con Leche Republicans, which he told NewsTaco would also be a PAC (political action committee). Garcia-Blase noted that just before Quasius’ resignation, she appointed Adam Bustos as Somos’ First Vice President, he’s a Republican.

Although as recently as last week Quasius, who lives in Minnesota, wrote a post under the Somos Republicans banner about why he was a strong Republican, in a subsequent announcement on Facebook he announced he left the group. Here’s what he said:

Along with other present and former Somos Republicans leaders, we are starting a new organization, which will take a fresh approach to many of the same issues, and which we strongly believe will achieve results. We wish our former colleagues at Somos Republicans the best of luck, and believe our two organizations in many ways will complement each other.

The new organization, Cafe Con Leche Republicans, consists of Republicans from all backgrounds who believe America and the GOP in particular needs to become more welcoming of immigrants. The recent rhetoric and “enforcement on steroids” is fostering a climate that is not only hostile for both legal and undocumented immigrants, but unhealthy for America as a whole.

Quasius told NewsTaco that four former Somos Republicans members left the group and are “on board” with Cafe Con Leche Republicans — and he expects more will follow. Only two of Somos Republicans’ 17 national leaders left the GOP, he told us. Blase-Garcia, who left the GOP and is now independent, countered that two of those members she personally removed for different reasons, including their support for SB 1070.

He later told NewsTaco that his decision to leave the group was based on his belief that Somos Republicans had strayed from its original goals. “Unfortunately, Somos Republicans has strayed far from it’s original mission to bring Hispanics to the GOP, and help the GOP better engage with Hispanics, and now encourages Hispanics to leave the GOP and does little to nothing to influence the GOP in a constructive positive way,” he told us in an email.

“Now the mission seems to be encouraging Hispanics to leave the GOP, and tear down the GOP until it changes, which we don’t think is a good strategy, and thus the split,” Quasius explained. Garcia-Blase points out that Quasius has participated in this discussion by writing a press release criticizing GOP presidential frontrunner Herman Cain for his comments on building moats along the border. The Cafe Con Leche Republicans, a reference he told us to the blending of culture and people in Latin America, is a direct response to Somos’ attack on the GOP, he said. Quasius’ new group aims to not only call out GOP extremists, but engage with the GOP as well.

As part of Cafe Con Leche Republicans’ efforts the group is searching for pro-Latino Republicans to back at the state and federal levels, presumably with the PAC, such as Minnesota Senate District 64 candidate Anthony Hernandez. Quasius told us that Cafe Con Leche will be led by “100%” registered Republicans, but will welcome everyone as members, and that was to enable the group to “have the credibility needed to influence primary contests, constructively engage with the GOP, etc. then the leadership needs to be Republican as well.”

Something, he said, not possible with Somos Republicans for Garcia-Blase’s public feuding with Republican party leaders. But, Quasius did add that both groups would “largely end up complementing each other’s efforts, with [Somos Republicabs] acting mostly in it’s present watch dog role, while [Cafe Con Leche] will emphasize grass roots party activism and constructive engagement.”

The split appeared to be amicable.