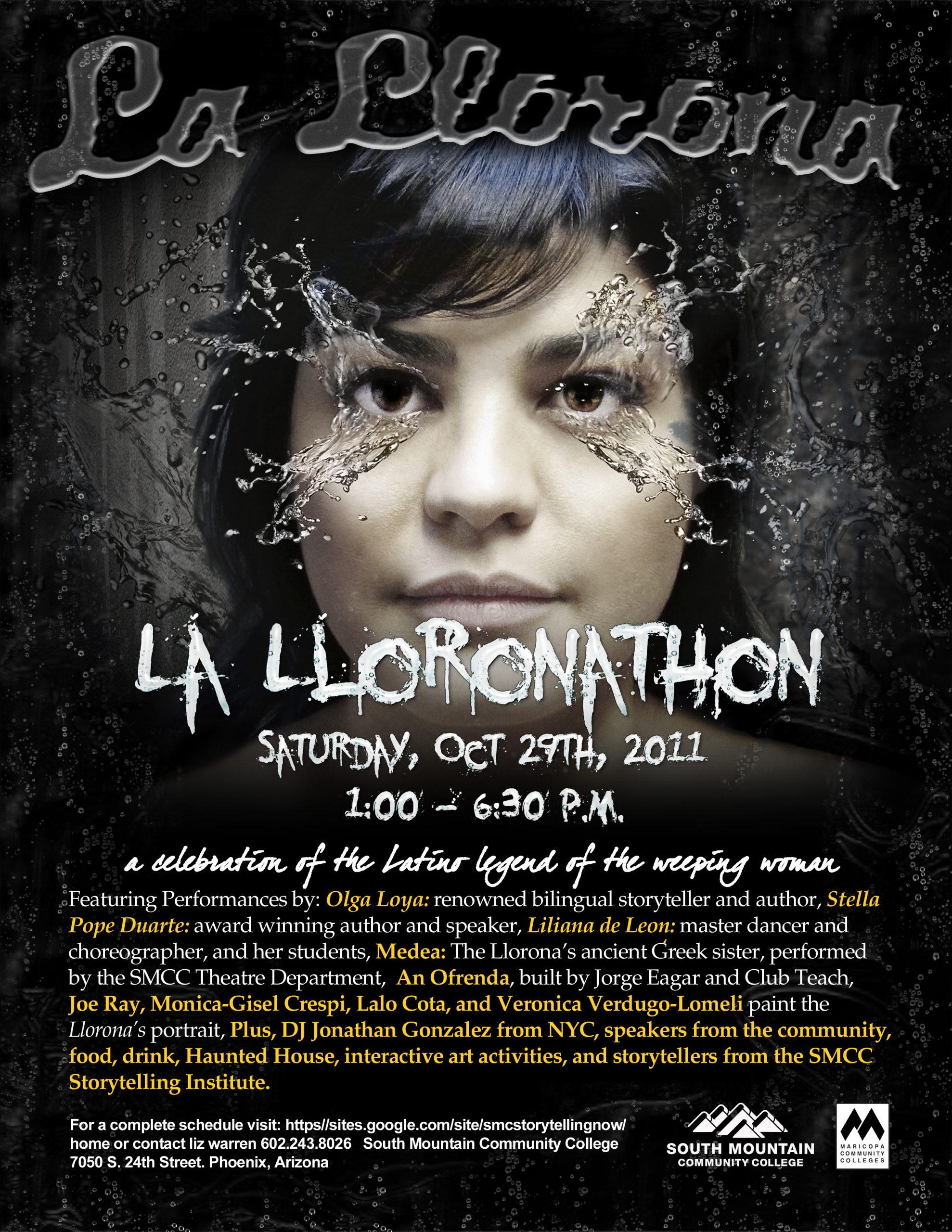 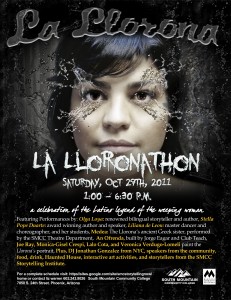 On Saturday, October 29 in Phoenix, Arizona the First Annual Lloronathon will be held at South Mountain Community College.  Organizer Joe Ray told NewsTaco that the premise was to celebrate what can be characterized as a Latino boogeyman — La Llorona — with stories, chismes and more. Here’s our interview with him.

The Lloronathon is an afternoon gathering of all things La Llorona. Stories, art, performance, dance, and Llorona-chisme. We all have heard stories about her while we were growing up. It varies from region to region, state to state, and with a variety of bodies of water.

People who grew up near a river see it pertaining to them via the river. Stories were told about La Llorona roaming near the river. The same with lakes, oceans, canals, etc. It varies with where you grew up. One friend told me she grew up knowing La Llorona roamed the canal banks in the Tempe/Mesa area next to Phoenix. That’s where she grew up. Obviously, her parents wanted her to stay away from the canals as a kid.

Also, La Llorona has been vilified through the ages. This presents an opportunity for a different point of view. One story which I will read is called A Letter to La Llorona, which is a letter written by Amira de La Garza. It is a letter written with a look back at youth and misunderstanding. She makes peace with La Llorona, to which Amira writes “You don’t need a name. You are every one of us.”

Plus, there are four artists who will be doing a live painting the entire afternoon. A fun project which will be inspired by the stories being told. The 4 artists are Monica Crespo, Veronica Verdugo, Lalo Cota, and myself.

How did it come about?

Liz Warren, Director of the Storytelling Institute at South Mountain Community College, and I were talking about doing a joint project. I’m an artist and a writer, plus I love stories. Liz and I have known each other for more than 20 years and share many of the interests. I originally posted a Llorona story on her storytelling blog and after that we began talking about it. It was a natural fit for the Storytelling Institute. We set up a blog for dialogue and to collect stories about La Llorona called La Lloronasphere.

Can anyone participate or just the invited guests?

We have some great storytellers who are scheduled but are open to anyone coming in and sharing stories with us. Plus, I encourage people to send me their Llorona stories to joe@estudioray.com, some are more comfortable doing this as opposed to getting up in front of an audience. Also, there will be an area where people can create art via painting, drawing or writing a story here as well.

Why did you want to set this up?

I’ve never been to a Lloronathon before and felt it was time. Plus, I like the name.

I enjoy collaborating with artists of different disciplines, ages and backgrounds. This was a perfect opportunity. Plus, this is an opportunity for groups, individuals and organizations of different backgrounds and purposes to get together, share stories, share art and share memories with one another. The stories that we share as people are what bring us together and promote understanding.

What are your hopes for the future?

Grow and expand it! It would be great to get sponsorship and funding for this to have it become an annual event and have certain aspects of it travel to other states where La Llorona is rumored to have been hanging around. I was in Mexico a couple weeks ago for a three-day fiesta of art, culture and biodiversity and I mentioned it to folks there who thought it was a great idea to include the following year down there. I’m really excited about that possibility.

Plus, developing an online community and looking at publishing something, which Liz and I have been speaking about. I want to see this become an educational part of Latino culture. It would be great to have this aspect of our legends, beliefs and literature be something that is explored wider by Latinos all over, and by those who interact and reach out to us.

Llorona2.0, I think this is a good start.