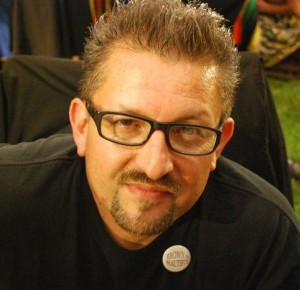 Earlier this month, cartoonist Lalo Alcaraz became aware of the fact that the Chicago Sun-Times was no longer running his comic strip, La Cucaracha, in its funny pages.

What ensued was a Twitter campaign to get fans to write to the newspaper asking for the comic’s return, the result of which still hasn’t been a return to publication for Alcaraz’s comic. NewsTaco spoke to Alcaraz about the issue, which he told us is simply another incarnation of an unofficial rule in the art world.

“I always suffer from the ‘one minority’ rule. If they have one black comic strip, that’s enough, nobody else can get in. Or, if there’s one Latino strip [that will be featured], it’s either mine or ‘Baldo,’” he told us. Which, he explained is to say that, while it’s great to have more people of color working in the comic world, the publication of their work continues to be limited under the guise of “inclusiveness” or “diversity,” one is enough to meet this idea.

Here are the tweets in question:

While Alcaraz does not feel that the omission of his work from the comic page is a direct result of his work or politics, the fact that the Sun-Times is cutting down its entire comics offerings — and starting with one of the few Latino artists — is disconcerting. Chicago’s Latino population isn’t minuscule, more than 2 million in Illinois concentrated around the city, and neither is the Alcaraz’s work.

For the past eight (or so) years Alcaraz tells us his work has appeared in the Sun-Times, this is after The Chicago Tribune held his strip embargoed and unpublished for a year. So, he told us he loves going to Chicago and having young people come up to him and compliment him on his work. And while he’s not sure if he’ll have this pleasure in the future — he’s told the decision not to run his strip is not an official one — he’s set to continue to do what he does best.

“Onward and upward,” he said.