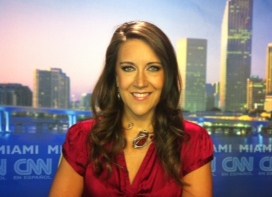 Today CNN announced that Democratic strategist Maria Cardona has joined the the network for the 2012 election season, according to Sam Feist, CNN senior vice president and Washington bureau chief.

“Having spent all of my professional career in communications, public policy, and politics, I’m thrilled to join CNN as a political contributor, especially as we are entering the excitement of the upcoming 2012 presidential election cycle,” Maria Cardona said.

Maria Cardona is a Democratic strategist and currently heads the public affairs practice at Dewey Square Group, where she founded the Latinovations practice that focuses on Latino strategic outreach on national, state and local levels. During the 2008 Democratic primary election, Cardona was senior adviser and spokesperson to Hillary Clinton’s presidential campaign and served on the campaign’s Hispanic outreach team. During the 2008 general election, Cardona was a key surrogate for the Obama for America campaign. Previously, Cardona was a senior vice president for the New Democrat Network, and before that, the communications director for the Democratic National Committee. During the Clinton administration, Cardona served as a spokesperson at the U.S. Departments of Justice and Commerce. In addition, Cardona will also contribute to CNN en Español.