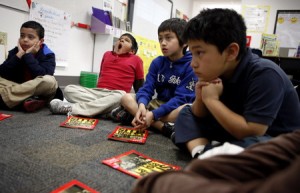 Hundreds of Hispanic students stayed home from school on the first day that Alabama officials began to enforce the “toughest” immigration law in the nation, including checking students’ immigration status, last week.

Thursday marked the first day that the law was enforced after a federal judge ruled parts of the law could move forward, including the requirement that schools check the immigration status of students enrolled for the first time.  As many as 231 Latino students missed school in Montgomery, the state’s capital.

“Obviously, there’s a fear factor about what the law is in regard to the schools,” said Keith Ward, a spokesman for Huntsville City Schools, which saw a high number of Latino students absent. “We’re not doing any enforcement. We’re in the business and have the obligation to educate all students. For us, it’s just data collection.”

Under the law, school districts must report the immigration status for each new student enrolled to the Department of Education.  The purpose is to keep a better record of how much money the state spends on educating undocumented students.

Latino parents around the state were taking steps to withdraw their children from classes, which could have a negative impact on schools’ funding, according to Montgomery schools Superintendent Barbara Thompson.

Thompson estimates that if the 231 students in Montgomery leave permanently the district could lose up to $2 million.

“When one student drops out, it affects the funding for the entire system,” she said.

Officials from the Alabama Department of Education came together late last week to combat misinformation surrounding the law in the Hispanic community.

“It’s unfortunate that rumors and falsehoods have led to the kind of hysteria that we see in the state right now,” said Michael Sibley, a spokesman for the Alabama Department of Education. “The idea that there’ll be any consequences to the child … or legal repercussions if the parent is in the country illegally are misunderstandings that we are desperately trying to clear up.”