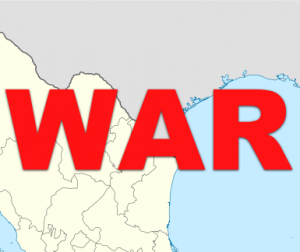 A new report commissioned by Texas’ next wannabe Lieutenant Governor and current Agriculture Commissioner Todd Staples literally labels the border as a warzone. This, despite actual reality and statistics to the contrary.

Ultimately what this report represents is the theft of the daily reality lived by millions of people along the U.S.-Mexico border by partisan politicos who are invested not in the best interests of Texas, but in their own selfish ends. Making the border into a war zone is fodder not just for political campaigns, but for untold gobs of money to be used for “border security,” by say, retired military men and overzealous politicians?

The report, “Texas Border Security: A Strategic Military Assessment” is bogus for many reasons. First, why is a state-sponsored report that cost taxpayers $80,000 taking a militaristic point of view? Is this about public safety or employing two retired military men with connections? The report’s authors, retired Maj. Gen. Robert Scales and Gen. Barry McCaffrey, actually claim that their anecdotal evidence is more important than actual statistical proof (that comes from agencies like, say, the Texas Department of Public Safety) because, “You don’t wait for the statistics to be rolled out.”

Among the fallacies in the report from The Austin American-Statesman:

…McCaffrey raised eyebrows when he spoke of “hundreds of people murdered on our side of the frontier,” a statistic that far exceeded the 22 killings between January 2010 and May 2011 identified by the Department of Public Safety as being related to drug cartels. When asked about the number, McCaffrey pointed to statements from a Brooks County rancher, who told reporters that hundreds of bodies had been found in the county in recent years.

Most of the bodies were those of illegal immigrants crossing the brush trying to avoid the U.S. Border Patrol checkpoint in Falfurrias and not victims of direct assaults, according to the Brooks County sheriff’s department.

That these fools made more for one fabricated report than some Texas families make in a year is laughable, but what’s tragic is that this is actually a state-sanctioned action. Half of the report is made up of “attachments” of other agencies’ documents and includes (predictably) untold numbers of military-style acronyms and scary-sounding phrases like, ” Mexico: Our Vulnerable Center of Gravity” (How does that even make sense?). Now, ignoring the fact that normal reports include appendices and references, as opposed to attachment and bibliographies, I’m going to venture to say that these guys are not who we need to be either investigating or prescribing policy for the State of Texas. The fact that the state’s Agricultural Commissioner is sacrificing the dignity and actual pressing needs of millions of Texans to promote some sort of wacko fantasy of two retired military guys that they are going to help prevent war along the border.

And, as I mentioned earlier, the people hurt the most by this are ultimately border residents themselves, who may not be living in the midst of a drug-fueled war zone, but are suffering from other tangible problems, such as poverty, unemployment, lack of health care, under-funded schools and other less sexy, less military-like problems. It’s too bad that Staples and his buddies are too busy playing war games to notice that the closest thing to a war being played out on the border is the one between fantasy and reality.