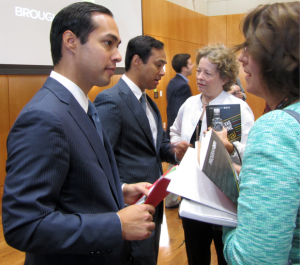 Austin, Texas — San Antonio Mayor Julián Castro and his brother State Rep. Joaquín Castro spoke today at the Texas Tribune Festival about San Antonio and its role as an energy city. Some of Mayor Castro’s energy policies include the Mission Verde Sustainability Plan, focusing on workforce training and the development of energy-efficient technologies.

Julián emphasized the importance of this job training within the fields of renewable energy, clean air, and clean water, as opposed to just stating their needed to be just a creation of jobs. A small example of San Antonio’s role with this reflects that in Alamo Colleges project to create facilities for greener jobs.

When the discussion turned to Q&A, Julián responded to a question about easing traffic congestion and supporting a clean air environment by highlighting high speed rail. “If not high speed rail, a commuter rail is needed because of the amount of traffic in the I-35 corridor,” the mayor said.

As we already know, we’ve seen a decrease in the amount of funds that go towards infrastructure for roads and bridges in this nation to adjust to the new percentages of drivers and population booms within highly congested areas such as the San Antonio-Austin region. The Mayor of San Antonio talked greatly about this projects significance to improving that infrastructure and just getting some sort of rail now even if it can’t be a high speed one just yet.

We also had a chance to ask the mayor and the state representative a few questions.

NewsTaco: If you could say one thing to students about the importance of all of this in their future with your ideas and this initiative, what would it be?

Julián Castro: Students can play a critical role in energy and the future of course by filling jobs first and foremost and secondly as advocates. Many students want to see additional investments in renewable energy in the United States, and they have always been a very powerful voice in helping to move action. With their voice,  they can play that role right now.

NewsTaco: What do you think are the most important issues for the success of young people in Texas and beyond?

Joaquín Castro: We need their help in building the infrastructure of opportunity in our country to make sure that our generation and younger generations have the chance to live out their dreams in the places they call home. And folks that are coming up right now are playing a very critical role in doing that.

People fundamentally want to know that if they go and study in engineering or biology that they are going to be able to go find a job in their country or in their community without having to travel halfway across the country or even globe and those of us in government are committed to make sure that that’s possible, but it also depends on our students.”