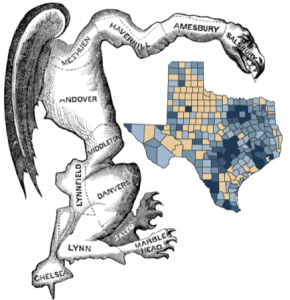 All of the arguments in the federal law suit against the State of Texas’ redistricting scheme have been made. The Plaintiffs – The Mexican American Legislative Caucus (MALC); LULAC; MALDEF – have rested their case. It’s now up to the State to present it’s final arguments and then the panel of judges will decide. The case boiled down to this, as expressed in a MALC newsletter:

Texas gained four new congressional seats due to the unprecedented population growth of minorities and the State has failed to adequately represent that growth in the new maps.

This may be the hardest part of the process, the waiting.

All of the research, the arguments, and the presentation of evidence, data and expert witnesses comes to this: how will the judges rule?

I know this crowd, this bunch of lawyers and activists. They’re not the type to sit and wring their hands. But they love to speculate and given free time, that’s what they’ll do. So let’s indulge the speculation – who are these judges that hold the immediate future of Latino politics in their hands?

What can we make of this? As much or as little as you want.

Going in to the trial the panel was seen as friendly to the plaintiffs cause – the 2 out of 3 Latino majority had the plaintiffs feeling good about their chances. The irrefutable evidence, they thought,was on their side as well.  The San Antonio Express-News reported:

…Dr. John Alford, a political science professor at Rice University — also said the redistricting map passed by the Legislature would keep the number of minority opportunity congressional districts the same, contradicting the state’s longstanding assertion that the map would create an additional seat.

In the afternoon after the plaintiffs presented their final arguments I met with one of the political activists who had been present throughout the weeks-long proceedings. He felt optimistic. Even judge Smith, he said, had asked questions during the trial that led him to believe that there may be a unanimous decision against the state’s new electoral districts. But who knows, he shrugged.

That’s about where we are. Who knows? We should find out soon.