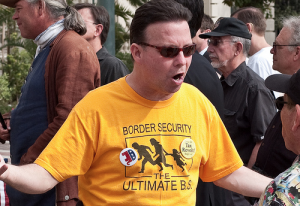 That an Ohio chapter of the Tea Party blatantly announces its affiliation with FAIR, or the Federation of Americans for Immigration Reform (FAIR), highlights the fact that the Tea Party has become an umbrella of “legitimacy” for many hate groups across the country. Dee Dee García Blase reported the affiliation on the Tucson Citizen and noted that the Grassroots Rally Team of Ohio, also affiliated with the Cleveland Tea Party Patriots, bills itself as an anti-illegal immigration group.

FAIR, for those not in the know, has a long history of racist rhetoric that started with its founder John Tanton. For example, the group has called Latinos “rats” that should be shot and that the only way for the U.S. to succeed is for it to remain white majority. Oh, the group was also the driving force behind SB 1070. This is a long, documented history of FAIR, so a group that aligns itself with this organization is probably not ignorant, but rather, purposeful.

We’ve written previously about how discussions about immigration affect all of us — U.S.-born Latinos as well as immigrants — because they pollute the conversation with undertones of racism and questions of legitimacy, even when policy debates have little to do with immigration at all. It’s a distraction, and so when Tea Party groups rail on “illegal immigration,” they’re not just talking about the act of migrating from one place to another.

What’s really going on is that they’re deciding who “deserves” resources, and more importantly, who does not. Thanks to Dee Dee for the tip.