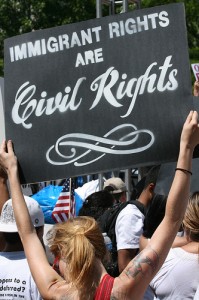 On Friday, a working group from the Department of Homeland Security and the Justice Department began its review of approximately 300,000 deportation cases currently in our system to distinguish between those who pose a threat to our national security and those who have committed immigration violations, also known as civil offenses.

“This is a great first step,” said Hector E. Sanchez, Executive Director of the Labor Council for Latin American Advancement. “We really need to see action on a common-sense approach to immigration and not just promises.”

The Obama administration’s announcement of its new immigration policy has received support from several Latino leaders for offering a sensible plan to temporary relief to deserving students, veterans and elderly currently undergoing the deportation process.

The new process and review of cases will relieve the backlogged immigration courts and clear some of their dockets to give more attention to serious criminals. Deportation cases would be canceled on a case by case basis, however immigrants eligible for work permits would need to apply through a separate process said a senior Homeland Security official.

Immigrants whose cases are canceled will remain in a legal limbo and change in their status can only be granted by Congress. They will not be exposed to deportation, nor will they have a positive immigration status.

The policy serves to focus resources where they are needed most, on high priority cases including cases in which immigrants have criminal records. It will prevent low priority cases from clogging our immigration court dockets, and while an important change, is a reminder that action is needed in Congress.