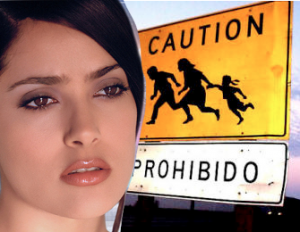 Manuel Vasquez, Assoc. Prof. at the University of Florida, recently delivered the keynote address to the “Imagining Latin America in Australia” Workshop at University of Western Sydney. His address was titled “The Exotic Other or the Toxic Other? Images of Latin American Immigrants post 9/11”.

Vasquez presented some fascinating images. The first was the July 2005 cover of BusinessWeek. It’s a great representation of the notions of otherness and assimilation. The left hand side depicts a darkened and threatening borderland, and a man in dirty clothing clutching belongings perhaps in a sheet or a cheap bag. The right hand side shows the man stepping into the light of American suburbia. He wears nice clean clothes, sports and armload of consumer purchases, and looks forward with optimism. It struck me how many of the same themes were explored in John Gast’s “American Progress” – darkness and light,  barbarism and civilization – but with the migration occurring in reverse.

He explained how the image of Latinas had morphed from the hypersexualised exotic woman (Jennifer Lopez, Shakira) and the devoted Latina mother (maybe also a domestic or childcare worker), into the hyperfertile producer of an invasion force of (brown) anchor babies, threatening the English language and Anglo-American norms.

Vasquez showed a short clip from August 2010 of Texas lawmaker Debbie Riddle, who claimed that irregular immigration and so-called “anchor babies” were in fact part of a long term terrorist plot.

It shows how quickly being ‘illegal’ can be conflated with ‘terrorist’. Moreover that was the message of Vasquez’ presentation – don’t be passive to stereotypes even if they appear benign or even positive. In times of stress, they can quickly become ‘toxic’.

Vasquez discussed how impossible progress was at this time as signified by the failure on Congress to pass the DREAM Act. This act was meant to create a pathway to citizenship for people in America who had been brought in as young children by their parents as irregular migrants. These children grew up as Americans, went to American schools and only perhaps as young adults found out that they are not American citizens. President Obama has recently reversed his policy of  “enforcement” and accelerated deportations aimed at winning Republican support for this bill. It failed to pass and is not likely to be reattempted.

Dealing with this climate of toxicity, plus the pain of the depressed economy, it was clear from Manuel Vasquez’ presentation that it is a very tough time for the Latino community in America.

[Photo Illustration Made With This And This]