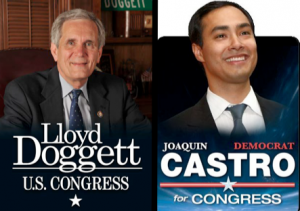 Which Democratic leader does the 35th congressional district “belong” to? The longtime congressman Lloyd Doggett or the state representative-turned-congressional-candidate Joaquín Castro? Considering that both are essentially new residents to this emergent district, I do not think they innately belong to either man—they have to earn the support of their new constituents including the Latinos, Anglos, Anglo Latinos, Latino Anglos, and the racially mixed Latino/Anglo hybrids.

Each time I read articles about this congressional district, much more is said about the dual advantages/disadvantages of Doggett’s whiteness and Castro’s latinidad and very little to do with what residents in east Austin, in particular, are concerned about such as the current range of educational resources available in that part of town. What journalists, analysts, politicos and “Latino community advisors” should be discussing are the high school graduation rates, classroom resources and caliber of faculty as well as the annual income of graduates which are worlds apart between west and east Austin, and have remained as such for decades.

The peculiar race-based logic that is balkanizing this crucial central Texas campaign serves as a good example of what we can come to expect from the upcoming 2012 discussion. 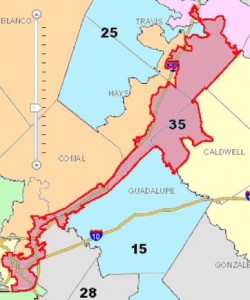 Will this predominantly Latino district that meanders across Caldwell, Comal, Guadalupe, Hays and Travis counties vote for Doggett because of their awareness of his dedication to Latino constituents and Latino populations across the state? Or should we apply that commonsensical race-based belief that if a Latino voter sees a Spanish surname on the ballot they will automatically vote for that person because the stereotype holds that all Latinos are mindless robots that stick to their own kind? Despite their mestizo origins, when over 90% of Latinos racially identify as white during each decennial census are Latino voters really all that different from other white voters?

Assuming that Latinos will all vote as one bloc is presumptuous, and is an indicator that both of these incredible Democratic figures must reassess the complexities of the various Latino subpopulations that inhabit the six counties they seek to represent.

In this racially charged election, previous and future representatives will be judged according to their influence on regional Latino issues related to education, healthcare and job creation as well as their dedication to improving the quality of life for residents in Austin, Kyle, Lockhart, Maxwell, New Braunfels, San Marcos, Seguín and San Antonio. Improving educational outcomes for majority Latino school districts in these counties, and increasing access to greater economic opportunities for historically underserved urban and rural populations are issues that will definitely be prioritized regardless of the candidates’ racial identification or age.

Congressional District 35 belongs to the residents and not the candidates regardless of how this election is being framed in recent coverage. Serving in this capacity is not going to be derived through political or cultural entitlement, it is only going to be achieved by the individual who has the vision and dedication to unify these disparate central Texas communities as a cohesive body of voters. Once Doggett and Castro get settled in  District 35 as new residents, I hope that they let go of the racial stereotypes that their campaigns have been inadvertently promoting and relate to their new constituents as fellow Texans who want the quality of life in our state to improve for the next generation.

Joseph P. A. Villescas, Ph.D. is an independent consultant, writer and instructor. He conducts extensive investigations on Latino and other multidimensional populations that explore trends in their educational development, media consumption, internet usage, voting behaviors, racial categorization, organizational capacities and readiness for future leadership roles in community settings. He is the founder and owner of Villescas Research, Media & Instruction, LLC.

[Photos Courtesy This and This; State of Texas]