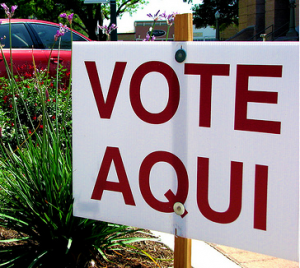 There’s a battle of historic proportions brewing around the issue of voting rights and the constitutional idea of one person, one vote. And I don’t exaggerate when I say that it’s of historic proportions. Let me explain:  this specific fight is about redistricting, namely the new electoral districts drawn by the Republican majority in the Texas legislature, and how those districts dilute the Latino voting power.

But the GOP’s districts weren’t drawn that way and those new drawings will soon be reviewed, according to the Voting Rights Act, by a panel of three federal judges.

This is historic because what happens today in Texas foretells what will happen across the country in the not too distant future. So it’s important to keep an eye on this issue.

Texas state Representative Trey Martinez Fischer is on the front lines of this battle. He heads the state Mexican American Legislative Caucus (MALC), that’s taken a lead role in the defense of Latino voting rights. MALC has filed a motion to intervene in the federal review of the new Texas districts. The Representative and I had a short phone conversation where he filled me in on the latest developments. You can listen to a recording of our conversation below.