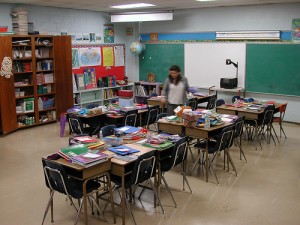 Six percent of the nation’s K-12 teachers are Latino, compared to 20% of the Latino student population in public schools – that’s according to reports by the National Center for Education Information and the Pew Hispanic Center.

The good news is that the number of Latino teachers has increased over the past year, but not nearly enough to keep up with the enormous growth of school aged Latinos. And while we’re pretty good at projecting the number of Latino students in public schools in the years to come –

we’re not that good at predicting the number of future Latino teachers. We know that the overall percentage of Latin0 teachers lags far behind the percentage of Latino students, and many researchers believe that the gap needs to be addressed. We just don’t know for sure how long it is going to take to remedy the situation.

We also don’t know if it will make a difference. Do Latino children do better in school if their teacher is Latino(a)? The Latinoedbeat.org  tried to answer that question but in the end  gave us no more than a pile of questions:

What effect does that have on learning? Do Latino children respond better when their teachers personally reflect their cultures and experiences? Are Latino teachers more likely to incorporate materials and lessons that appeal to diverse student populations? Do Latino parents work better with Latino teachers?

And that’s because there is no easy answer. My own kids had mostly white teachers, and they did okay – one just graduated form an Ivy League school and the other studies at a prestigious film school. But my kids weren’t at risk and they didn’t go to inner city urban schools, so their experience was not the same as that of the majority of U.S Latino kids. And it’s precisely in low income, inner city classrooms where Latino teachers may be able to make a difference.

I’ll be first in line to thank any teacher who chooses to work in urban classroom settings; they mostly mean well and I don’t mean to sound condescending when I say that. It’s just that many of the non-Latino inner city school teachers I’ve spoken to have a certain “pobrecitos” attitude that does Latino students no good. Their pity, although well founded, doesn’t allow for challenging the students to rise above their circumstances. And truth be told some Latinos teachers aren’t any better – they have a my-kids-can’t-learn-complicated-stuff belief that short changes their students.

I also don’t want to diminish the wonderful work done by thousands of teachers who sacrifice their time and money in order to make a difference in the lives of children who live in the most dire circumstances. Many of the nation’s good teachers are Latinos who do what they do selflessly.

What we do know is that the number of Latino educators needs to increase, if for no other reason than because it would enrich the diversity and experience within the teaching profession. And that would go a long way towards closing the education gap and the effects of poverty on learning. The children’s Defense Fund reports:

children are the poorest age group with 15.5 million children—one in every five children in America—living in poverty, and more than 60 percent of fourth, eighth and 12th grade public school students are reading or doing math below grade level.

It’s possible, but I come at this with the same attitude with which I approach politics. We shouldn’t vote for Latino candidates just because they’re Latino, and if they are bad politicians (“políticos rancios,” as the late Henry B. Gonzalez used to say) we should vote them out. In the same way we shouldn’t assume that a Latino teacher will be best for Latino students simply because they share a culture.

What we need are good, committed, creative teachers and we need to make it possible for more talented Latinos and Latinas to become educators.

Granted, there’s a lot more that needs to be done to close the Latino learning gap – politics, funding, parental involvement – and that’s enough to take up more space then you’d care to read in one sitting. But in that litany of needs the dearth of Latino teachers is important. Six percent is nowhere near enough.