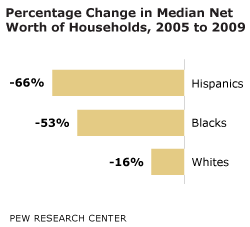 Latino families were hit the hardest during the recession that has now spanned several years, according to a new report from the Pew Research Center’s Social & Demographic Trends project. Here’s an excerpt:

Median household wealth among Hispanics fell from $18,359 in 2005 to $6,325 in 2009. The percentage drop—66%—was the largest among all racial and ethnic groups, according to anew report by the Pew Research Center’s Social & Demographic Trends project. During the same period, median household wealth declined 53% among black households and 16% among white households…

because Hispanics derived nearly two-thirds of their net worth in 2005 from home equity and a disproportionate share reside in states that were in the vanguard of the housing meltdown, Hispanics were hit hardest by the housing market downturn.

So there you have it. Having invested in the American Dream of owning a home, Latino families were the first to fall as the economy crumbled. Here’s the full report.