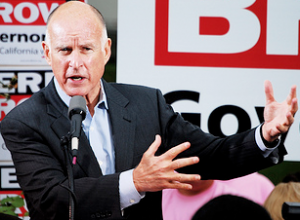 California Governor Jerry Brown signed legislation yesterday that would allow undocumented students to receive privately funded financial aid in California. This is one half of a “DREAM Act” bill that Brown said he would sign. The other half is currently stuck in the legislature.

This DREAM Act, though, does not create a pathway to citizenship for the California students affected by the law. The Governor signed the bill at a much-hyped ceremony with the bill’s sponsor, Assemblyman Gil Cedillo, in attendance.

The Los Angeles Times reported that this, in one sense, was Brown’s way of pandering to the Latino voters who helped elect him. What’s more:

During a signing ceremony at Los Angeles City College, Brown largely brushed over the thorny politics of illegal immigration and sought to frame the legislation as part of the struggle to maintain education funding during California’s budget crisis.

“The debate is very clear: shrivel public service, shrink back, retrench, retreat from higher education, from schools, from the investment in people; or make the investment,” Brown said. “This is one piece of a very important mosaic, which is a California that works for everyone.”

I wonder what will happen to these pieces of legislation when, finally, the federal government passes DREAM Act-ey legislation. It is an inevitability, just a matter of how long we have to wait. What do you think about states making up the deficit by passing their own legislation to address the millions of DREAMers in the U.S.?