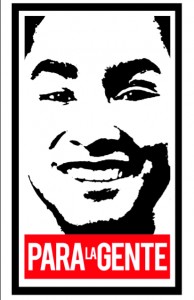 Texas congressional candidate Joaquín Castro says he has a winning formula for economic prosperity for the nearly 1.5 million Latinos that reside in a cluster of six central Texas counties he hopes to represent. The corridor that stretches between San Antonio and Austin — a mere 70 miles — has proven to be a daunting economic barrier to Latinos in either city for a variety of reasons.

If you live in San Antonio, access to jobs and educational resources in Austin seems far out of reach, considering traffic between the two cities is limited to exactly one freeway that turns into a parking lot during peak hours. Living in Austin, the search for a better life can also be difficult, as San Antonio’s educational institutions are somewhat less elitist and the housing market is open to many more households than is Austin’s. In short, the millions of people that live in either city, and in between, have long suffered from being just out of reach of each other’s internal assets.

But candidate Castro says he has the solution.

“I believe that working together, all of the cities in this Interstate-35 corridor — Austin, San Antonio, San Marcos, Kyle, Buda, all of them, Lockhart — that we can literally build the most economically vibrant corridor and region in all of the United States over the next generation,” he said recently at an Austin campaign event.

“I see the same future that somebody might have seen between San Francisco and San Jose, where you have the Caltrans system and the BART system, and these rail systems that are within a city — but they also flow among all of these other cities and connect the communities in that way. It makes it easier to accomplish economic development because now your people are able to get around more effectively.”

A state-of-the-art rail system has yet to be constructed between these two growing Latino economic centers, but as the political voice tying them together Castro hopes that his legacy will be making this rail a reality — not to mention the economic boom that will inevitably come with it. Castro said that, in a large part, this comes down to vision. But as the congressman of this district he hopes to address the vision, the manpower, the brainpower and the demographic challenges such a proposition would entail.

The future of Texas is growth, particularly in these two regions, and that means more cars in an already saturated interstate spells disaster. Castro proposes to gather the mayors, university leaders, business people and community leaders to envision the plan of this rail system, and what it would entail, looking past the rail itself and towards long-term economic development.

Ultimately, as the cost of fuel increases for this soon-to-be “Latino majority” region of the country, the preemptive development of mass transit systems will allow this burgeoning generation much more efficient and affordable pathways to economic opportunities that will emerge in the decades ahead.

Joseph P. A. Villescas, Ph.D. is an independent consultant, writer and instructor. He conducts extensive investigations on Latino and other multidimensional populations that explore trends in their educational development, media consumption, internet usage, voting behaviors, racial categorization, organizational capacities and readiness for future leadership roles in community settings. He is also the founder and owner of Villescas Research, Media & Instruction, LLC.