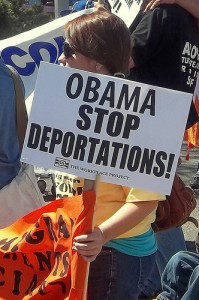 Republicans recently introduced a measure in Congress that would remove the President’s discretion to prioritize deportation cases, in essence ending the practice of prioritizing dangerous criminals and stopping delayed deportations.

Rep. Lamar Smith (R-TX) and Sen. David Vitter (R-LA) introduced the bill, called the HALT Act, because they claim the President is in effect granting amnesty to millions of undocumented immigrants.

“If the President gets his way, millions of illegal immigrants will be allowed to legally live and work in the U.S. without a vote of Congress,” Smith said in a statement.

He says the President’s directive to prioritize dangerous criminals over other cases is “a massive administrative amnesty to illegal immigrants.”

If passed, the bill will also limit parole and granting of work permits to undocumented immigrants and the granting of extensions of Temporary Protected Status to those who cannot return to their countries because of natural disasters and other unforeseen circumstances.

“Congress must put a halt to this administrative amnesty,” Smith added.

Immigrant rights activists are criticizing the law and several Democratic lawmakers blasted it saying it would force the administration not to distinguish between “criminals, terrorists, and other threats — for deportation — over non-criminal immigrants with deep roots in U.S. society.”

Congressman Luis Guitierrez (D-IL), a staunch supporter of comprehensive immigration reform called the law “petty.” Gutierrez especially favors administrative discretion in the deportation cases of “DREAMers,” students who he says were brought to the U.S. by no fault of their own and find themselves in legal limbo over their immigration status.

The strong bipartisan disagreement will likely continue to result in gridlock as each side proposes legislation to repair our broken immigration system.