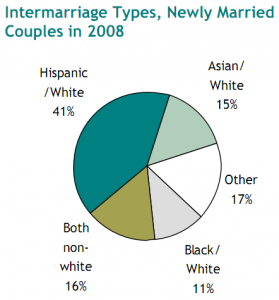 Most times, Americans don’t think of Latinos as being mixed or multicultural, but in reality Latinos are leaders of multiculturalism and mixed families.  Start off with the fact that most Latinos come from a combination of European and Native ancestry, a mixing that began with the colonization of the Americas.

But beyond that there are other historical mixings, including African ancestry, Latinos in the U.S. are also in the unique position of straddling the borders of two dominating cultures, popular American culture and that of their own Latino heritage.  This puts Latinos in an excellent position to understand a variety of perspectives and address multiculturalism with ease.

In fact, Latinos make up a good part of the cultural mixing going on in the U.S. right now.  The Pew Research Center reports that 14.6% of all new U.S. marriages are interracial or interethnic and of those marriages 26% include those who identify as Hispanic or Latino.

But even though Latinos are intermarrying at a higher rate than most and have long been mixing among themselves, it seems that most Americans don’t think of Latinos as culturally and socially mixed and wouldn’t necessarily bring them up in a conversation about mixed heritage or think of them as multiracial and multicultural.

Why?  This is something of a mystery to me. But, perhaps it’s the fact that Latinos have been mixing for so long that it’s hard to see it as an abstract — or maybe it’s the social stereotyping of mixed families as classically “black and white” that prevents Americans from viewing Latinos as part of the big picture? No matter the reason, Latinos are often well-versed in social and cultural mixing and it appears that the census numbers and studies are showing their growing comfort with the topic.

A recent article in Racialicious examines the depth of the “who’s ‘mixed’ and who isn’t” discussion.  While there are some clear distinctions between the experiences of “first generation” mixies and those who have mixed ancestry, some feel that only “first generation” individuals should count.  It could also be argued, however, that both are considered “mixed” since their bloodlines each consist of multiracial heritage.

In one step further though, you could even consider mono-racial, but multicultural families “mixed” in a sense…as in culturally mixed.  Any way you slice it and no matter how you label it, a multitude of mixed families have more in common than not and could benefit from sharing their unique stories, rather than alienating each other when certain “technical” qualifications aren’t met.

Mixed lifestyle isn’t simply a “black and white” topic, and since Latinos make up a rather large piece of the pie, shouldn’t they be a bigger part of that conversation?