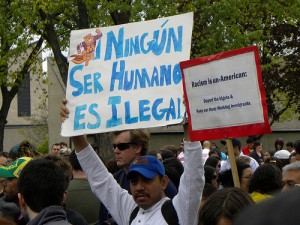 The Alabama immigration law hailed as the toughest anti-immigrant measure in the nation is being challenged in court by a coalition of civil rights groups.

The group, which includes the Southern Poverty Law Center and the National Immigration Law Center, filed a lawsuit in federal court Friday criticizing the law for its “unprecedented reach.”

“Individuals who may be perceived as ‘foreign’ by state or local law enforcement agents will be in constant jeopardy of harassment and unlawfully prolonged detention by state law enforcement officers,” the lawsuit says.

Landlords would also be prohibited from renting to undocumented immigrants.

“This legislation is another indication of Alabama’s Republican leadership going way to the right wing,” John Zippert, program director for the Federation of Southern Cooperatives Rural Training & Research Center, said.

The agricultural sector in the state has been particularly critical of the negative effects the law could have in the farming industry.

“This is scaring Hispanic workers away, not just from the Alabama fields, but also from the northern Alabama, in chicken processing plants. I don’t think other unemployed people are going to take those jobs. It’s very hard work and not fairly paid. From an economic standpoint, this is a real problem,” Zippert said.

The law is scheduled to go into effect on Sept. 1.