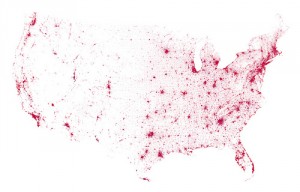 Three of the world’s most populous nations currently and through 2050 are located in the Western Hemisphere, and two of these three countries are located in North America. Knowing as we do that the U.S. Latino population will become an increasing demographic segment of the population — and that therein the Latino population of Mexican origin is the most significant — these past, current and future trends are of interest to the larger history of these communities in this country.

First, only two countries in the Western Hemisphere besides the United States between now and the mid-21st century will be among the 11 most populous nations in the world. These include Brazil and Mexico in that order. This according to the U.S. Census Bureau’s International Data Set, providing detailed demographic information for 228 countries around the world especially for the years from 1995-2050. Each individual country’s data albeit may be searched for pertinent past and projected data for the period from 1950-2050.

Third, given that two of these three nations are located in North America, we thought well to consider the third country, Canada, that comprises this important region of the world in terms of its population’s present and future. Canada’s 2011 population of 34 million will increase by 2050 to 41 million, a net increase of 7 million people (or 21 percent). In 2011, Canada ranked 37th among the world’s 228 nations; by 2050, Canada is projected to rank 46th in this respect.

It is worth noting that the 50.5 million U.S. Latinos counted in the 2010 Census far outnumber (by more than 16.5 million people) the total number of Canadians. Similarly, if the approximately 33 million U.S. Latinos of Mexican ancestry counted in 2010 are considered then this population segment alone nearly equals the entire population of Canada today. Based on these numbers one can easily project that at some point in the near future there will be more Americans of Mexican ancestry in the US than there are Canadians in the neighboring nation to our north. Likewise, the 50.5 million US Latinos counted in the 2010 Census if ranked as a “nation” among the world’s most populous countries in 2011 would rank 37th, just behind Argentina and Spain in 35th and 36th places with their slightly larger populations.

And by 2050, per one recent study by the Pew Hispanic Center, U.S. Latinos will number 128 million. A more recent 2009 brief by the U.S. Census Bureau, Hispanic Americans By the Numbers, revised this figure upwards and noted that by 2050 U.S. Latinos would number 132.5 million. By 2050, according to our International Data Set, were U.S. Latinos a separate nation, they would rank in 14th place just above 15th ranked Uganda (128 million projected population) and right below 13th ranked Egypt (138 million projected population). That is, U.S. Latinos would rank ahead of all Western Hemisphere nations in 2050 if they were a nation onto themselves except for the United States, Brazil, and Mexico. By 2050, there will be 3.2 times as many U.S. Latinos as there will be Canadians living in North America. To be sure, dual English and Spanish speakers and with it biculturalism and bilingualism will be alive and well in the United States. And except for Mexico, U.S. Latinos will be largest the Spanish-speaking “nation” in the world.

There will be a growing and steady need to develop and prepare expert scholars and professionals capable of fully understanding these communities in the context of their history and culture. Expanding and institutionalizing the study of their contrasting transnational and indigenous experience at our public and private universities will be required. Including their stories and study in the curricula at all levels of education needs to be pursued, reaction to the contrary from intolerant corners of our society notwithstanding.

Professor Roberto R. Calderón, Ph.D. from the Department of History at the University of North Texas in Denton, Texas.