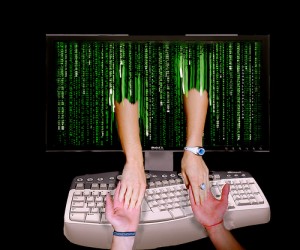 I’m a tall, half Asian woman. I’m a performing artist and a healer. I dance in nightclubs, as well as talk to people about their problems. I have tattoos. I dress in black and chrome a lot. I’m Buddhist. I speak Texan fluently. All of these could be qualifying or disqualifying factors depending on who you’re talking to in the online dating world. All of this swirls together into a bewildering racial and cultural stew that defies straightforward presentation.

Like most people I’ve tried online dating a few times, making brief tours through Match and OKCupid. My profiles — articulate, lengthy, permeated with Mick Jagger and M.I.A. videos, and the requested variety of photos, attracted a wide variety of “curious and curiouser” types. I talked to polyamorists, swingers, worn out players, fetishists, actors, the recently divorced, the recently bereaved, self appointed Messiahs, the broken, bored, the stoned, the lost. After short periods of time — about five weeks each round — I became overwhelmed and fled each site confused, full of doubt and wondering what I was doing wrong in terms of presenting myself.

So, I decided to try an experiment with Craigslist. I chose Craigslist because it’s text-based rather than photo-based. I suspected photos were working against me in some way I couldn’t perceive. I created three separate ads for Craigslist, all of which were posted within a day of each other. All three ads described me as a degreed professional looking for activity partners, friends, and maybe a relationship if the other two things worked with a bit about my interests and preferences (within five years of my own age, no kids, no habitual drinkers or smokers, creative, active).

I felt deeply uneasy about specifying my race in the ad. My feminist side said that my race shouldn’t matter. My real life experience of growing up as a Vietnamese-American in Texas during the Vietnam War said that it absolutely matters. The degreed professional part of me said that my intelligence and accomplishments should trump the race factor. There turned out to be a lot of “shoulds” that would come up in this experiment. Including information about my race in a personal ad felt like a disclaimer, or a warning: let all “slanty-eyed haters” not enter here! I asked myself if I was on the defensive about my racial heritage — a question that didn’t yield an easy answer.

Would it have been the same if I’d said I was Latina, or Black, or Samoan? Is being vaguely generic the most acceptable way to present yourself in America no matter who you are because being too “ethnic” is inevitably bad? What does “exotic” mean, anyway? In my wanting to belong to a partnership, which is more important? Or can they run together without conflict? If my Asian-ness or exoticism attracts a man, does this mean that in some way he will always see me as more separate than others?

To me, the true experience of racial privilege is that of never having to think about your race. This is an experience that I can safely say I’ve never had. Whether I like it or not, Asian women appear to be the focus of a great deal of sexual fetishism. I was born in Texas and have never been to Vietnam. I don’t speak the language and don’t have any magic code to unlock the ingredients of strange things in bags at the Chinese grocery. On the other hand, I do possess secret knowledge of what’s going on in some people’s heads — hence why I’m good at my work — and I do know a bit of kung fu, and what shrimp crackers taste like. How to sort it all out?

The man I’m now dating told me the other day that out in rural Texas, a resident referred to a little adopted Asian girl as a “g**k” in front of him without a trace of shame or remorse. I wonder how that little girl is going to navigate growing up in a place where the shape of her eyes informs everything that other people think and see about her before knowing anything about her insides. With any luck, by the time she gets to dating age, she’ll have found someone like me to help her out.

Elaine Dove is an artist and a healer who lives in Austin, Texas.