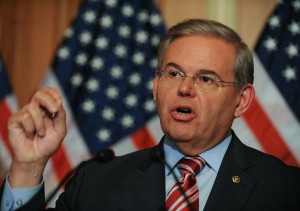 A new comprehensive immigration reform bill introduced on Wednesday by Sen. Robert Menendez (D-NJ) and other Senate Democrats includes tougher provisions that the legislators hope will sway their Republican counterparts to pass it.

“Today we are living with a broken immigration system that weakens our national security, hurts our workers and falls short of the most basic standard of justice,” Durbin said. “To fix this system, we need a comprehensive approach that is tough, fair, and practical.”

Border security is currently more beefed-up than it ever has been before, but Republicans have continued to stall saying they would not support a comprehensive immigration reform bill until the border is secure.

The number of border patrol agents along the Southwest border has more than doubled since 2004, according to the United States Customs and Border Protection.

“It has provisions in there on border security to reach out and say we’re serious about getting something done,” Menendez said. “It’s largely a multi-pronged approach that includes border enforcement, employer sanctions, future flows, a pathway to earned legalization, the DREAM Act and Ag Jobs element.”

A key provision of the bill the Menendez bill paves a pathway to citizenship for undocumented immigrants only after they meet a number of requirements, including registering with the government, paying taxes, learning English, paying a fine, pass a background check, and wait in line for permanent residence.