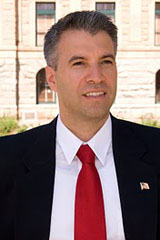 Most recently Arizona has been in the national headlines because of the outbreak of wildfires. At no time in our history have we ever experienced fires of this scale, that have consumed hundreds of thousands of acres and left many Arizonans without a home to return to.   So one would expect someone like Senator John McCain, our senior Senator from Arizona and former Presidential candidate, to use his position of influence to comfort those who are suffering, help allocate additional resources to fight the fires and engage in a dialogue on prevention to reduce the likelihood of a similar tragedy occurring again.   Instead, Senator McCain, Mr. Straight Talk Express and self-proclaimed Maverick, chose to use the national media and spotlight to blame “people who have crossed our border illegally.”

Senator McCain went so far as to say that “substantial evidence” exists to support his accusation and he went on, being the expert that he is on human smuggling and determining the origins of wildfires, to state as a matter of fact that “they (illegal border crossers) have set fires because they want to signal others; they have set fires to keep warm; and they have set fires in order to divert law enforcement, agents and agencies from them.  So the answer to that part of the problem is to get a secure border.”  Yes, Senator McCain has now tied the wildfires in Arizona to border security.

Where is the “substantial evidence” Senator McCain?  Where are the pictures or witnesses to support his accusations?  Where is his common sense?  At a time when our state is still recovering from the divisiveness and economic damage caused by SB 1070, at a time when immigrants are being scapegoated for stealing jobs and declining wages and at a time when people are vulnerable, scared and unstable, Senator McCain chose to ignite another firestorm, a political firestorm, by prematurely declaring who is to blame.  Thank God no one has yet to unleash their anger and frustration on an illegal border crosser.

Given the politically charged environment in Arizona, given the abusive practices and policies of Sheriff Arpaio and his obsession with illegal immigrants and given the extreme behavior of Senate President Pearce when it comes to addressing the problem of immigration, this is not the time to fan the flames of fear, intolerance and ignorance when it comes to determining who or what caused these fires.  We should leave the investigation and fact-finding as to the origins of these wildfires to the experts and call on our elected leaders to not add any more fuel to the political fire by issuing irresponsible, unsubstantiated and incendiary remarks about any particular group of people being responsible for this disaster.

All I can say with absolute certainty and conviction is that any individual responsible for starting any of these fires should be prosecuted and punished to the full extent of the law.