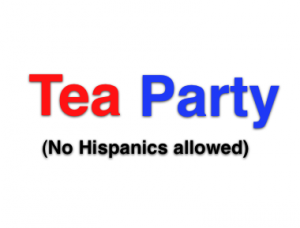 The following pretty much speaks for itself, so here’s a brief introduction. The Texas Democratic Party sent out a press release today including the remarks of a Texas Tea Party leader, Rebecca Forest, who’s also the founder of the Immigration Reform Coalition of Texas.

“If you want to know why we can’t pass legislation in Texas it’s because we have 37, no 36, Hispanics in the Legislature. All of the states that have passed legislation have a handful and I mean literally, some of them have no Hispanic legislators, well, maybe 3 or 5 or something. So that’s, umm, part of our problem and we need to change those numbers.

“Umm, we need to do something about that in fact, during the debate on ‘sanctuary cities,’ several Hispanic legislators testified that their grandparents and their parents were migrant workers who came over here to work and that they even worked in the fields. And some of them even admitted that they had been here illegally and that they came illegally. So the problem is these Hispanic legislators…is that it’s too close to them and they, umm… simply cannot vote their conscience correctly. So that’s about all I have to say to you, please come to the hearing, and help us spread this message. Thank you.”

So the problem is that Latinos have become elected officials? Wow, um, I guess that pretty much says it all, now doesn’t it? Here’s the video: