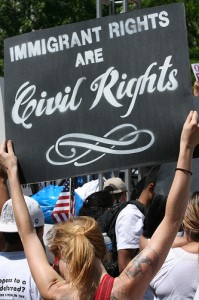 The groups that have banded together and filed a class action lawsuit last Thursday include the American Civil Liberties Union (ACLU) of Georgia, the National Immigration Law Center (NILC), the Southern Poverty Law Center, the Asian Law Caucus, and a coalition of other organizations.

In the lawsuit, the groups claim that the Georgia law, HB 87, is unconstitutional because it interferes with federal immigration law.  The law also promotes racial profiling, according to critics.

“By perpetuating the hate rhetoric that has become commonplace among many elected officials, this law threatens the rights of citizens and non-citizens alike by encouraging racial profiling.  Sadly, too, it places Georgia on the wrong side of history,” Bauer said.

Georgia became the third state to pass legislation similar to Arizona’s controversial SB 1070 law, which forces law enforcement officials to question the immigration status of anyone they detain during routine stops.

Georgia Gov. Nathan Deal signed the bill into law last month and it is slated to be enacted on July 1.

“Georgia’s law is fundamentally un-American: We are not a ‘show me your papers’ country, nor one that believes in making certain people ‘untouchables’ that others should be afraid to assist, house or transport,” Omar Jadwat, staff attorney with the ACLU Immigrants’ Rights Project, said.

Prior court rulings involving Arizona and Utah—the second state to enact immigration legislation in the past year—may be indicative of the Georgia law’s fate.

“The courts have blocked Arizona’s and Utah’s laws from going into effect. Georgia should be prepared for the same outcome,” Jadwat said on Thursday.