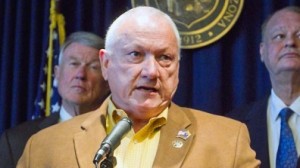 Fed up with Pearce’s divisive politics, the group Citizens for a Better Arizona filed its petition with the Arizona Secretary of State on Tuesday.

“Today, citizens from Arizona have come together to make a bold statement that the divisive and extreme politics of Russell Pearce must end,” said Randy Parraz, an organizer for the recall campaign.

The group, which describes itself as a “coalition of concerned citizens committed to improving the quality of life of all Arizonans,” gathered more than twice the amount of signatures required to submit the petition, a total of 18,315.  The required amount is 7,756 signatures.

Pearce has sidestepped answering any questions about the recall campaign, but did comment on the show of support from his allies.

“I am so grateful that some of my friends have stepped forward to oppose this recall and defend the truth. The personal, hurtful attacks by people who don’t even live in Arizona must stop. Working together, we can bring Arizonans together and move our state forward,” he said.

The former lawman continues to take on immigration issues, seeking to strip the citizenship of children of undocumented immigrants and proposing legislation that would force hospitals to question the immigration status of patients and report them if they are not authorized to be in the country.

A judge blocked the most controversial parts of SB 1070 from going into effect last summer, including the provision that forces law enforcement officials to question the immigration status of persons they suspect of being undocumented during a routing stop, just days before it became law.  A federal appeals court recently upheld the ruling as well.

“He has a fanatical obsession with one issue that he has pursued at the expense of everything else that’s important to Arizonans,” said Parraz. “The legislation he has pursued has been ineffective, has cost our state tens of millions of dollars to implement and defend in court, and has run hundreds of millions of dollars of business out of our state.”