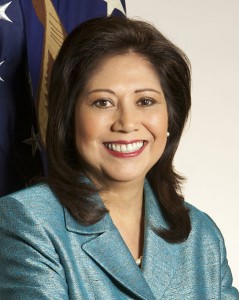 U.S. Secretary of Labor, Hilda L. Solis is accustomed to highlighting issues that, for others, are easily forgotten. At a town hall at East Los Angeles College Friday, Solis participated in a conversation that lasted 90 minutes and included the expertise of civic leaders like Dolores Huerta, noted labor activist Father Richard Estrada from Our Lady Queen of Angels Church, and Laphonza Butler, president Service Employees International Union.

Solis spoke with preternatural ease to an auditorium pulsing with ELAC students, card-carrying SEIU members (clad in purple T’s), a column of cameras pointing at overdressed telejournalists, and a cadre of local reporters snapping indiscriminate shots of the proceedings. Plus, the amount of pressing flesh, handshakes, and brown man pounds was enough to make any person blush.

According to the Department of Labor the event was, “a continuation of the national conversation that President Obama started in a speech in El Paso, Texas on May 10, 2011.” Solis spoke in a conversational manner about immigration reform, and allowed the “stories” that lose volume behind jingoistic doggerel to speak leagues. She spoke with great conviction, adagio, so that every phrase carried the strength of time. And even though the purple acoustic panels in the Recital Hall surely helped Solis’ timbre, her tone became resounding, and her credentials obvious: First Latina in the California State Senate, First Latina Secretary of Labor, etc.

In short, her speech advocated for the nation to realize the “economic benefit immigrants bring” and that “comprehensive misrepresentation is not in our best interest.” In terms of whether states or the federal government should decide the future of immigration, Solis was transparent. She said it was “not about 50 states entering legislature, but about a federal program,” hinting that it was up to the federal government to decide what should be done with illegal immigrants (asylum versus extraction). Solis used the power of stories about immigrants to drive the point home; she even cited her story of sacrifice and struggle being raised by immigrant parents, who experienced great bouts of anxiety over their work situation in the U.S.

She cited compelling statistics to reinforce her contentions that immigrants are a positive, vital, and law-abiding sector of our society. “For example,” Solis said, “In the U.S., immigrants file three times as many patents as non-immigrants.”

Therefore, what needs to change is the perception of immigrants; what needs to stop is the rampant scapegoating they are constantly subject to, and the vitriol our more conservative citizens like to concoct every time dismal unemployment figures go public. Solis’ introduction was given by Dolores Huerta, the co-founder of the United Farm Workers of America. Huerta’s introduction emphasized Solis’ commitment to all the people of California, reminding us that Solis went after exploiters in her district, but did not let that stop her from going after agricultural employers in, say, Pescadero, California.

Yago Cura is a writer based in Los Angeles. He edits the online journal Hinchas de Poesia and moderates the blog Spicaresque.