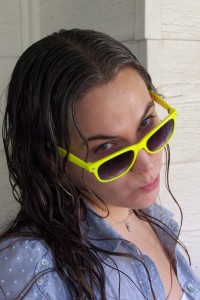 I don’t suppose I’ll ever understand why, exactly, men think this is a good way to attract attention. I’ve never been tempted in the slightest to return these calls in kind, rather, when men do this they simply reenforce the stereotype that “all men are pigs.” Although I know this not to be the case, these incidents surely do make a good point it.

Today I was taking myself too seriously as I hurried around downtown with a heavy backpack when a guy in a beat-up 90s minivan slowed down to where I was walking. “How you doin’” he asked with the nastiest connotation possible, ogled me, and drove on. I mean, it’s the same scenario repeated since my womanhood began to bloom: guys could be in teams, by themselves, across the street, on bikes, etc.

The sounds could be hisses, whistles, whispered cochinadas, open invitations, false compliments or stupid questions. Whatever the case, the intention is pretty clear, and my reaction is always the same: omg, what a loser. As though someone who were purely interested in a five-second vista of my sweaty self downtown could possibly be attractive to me in any way.

I’m not saying I’m too good to be hassled in the street, but these incidents honestly disappoint me because I know so many men who are so good. I know men who are respectful and admiring of women generally, and luckily, of me in particular. I know men who would never want to be seen as perverts, and so, would never deign to pull a drive-by cat call. So, I’m confused by the fact that there are so many men out there who think this is a good way to attract attention.

Or perhaps I’m wrong when I think that the men doing these cat calls are actually trying to, well, do whatever it is they think they’re going to do. Maybe they don’t actually want my number, maybe it’s just their way of trying to expel some of their machismo, a reminder that they, too, were once young and had dreams before the weight of daily life and all its dramas began to weigh on them. Perhaps none of the cat calls are really about women as people, but women as ideas, as moments in time, as mnemonics for the way things could have been.

Or, they could just be pigs.