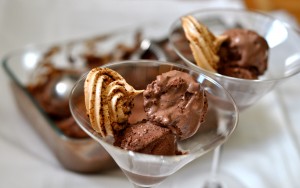 This rich and creamy ice cream takes inspiration from the softer Italian gelato. It has an intense chocolate flavor plus all the familiar flavors of Mexican hot chocolate: spicy chili and warm cinnamon. An added bonus here is to use the leftover egg whites and turn them into meringues. I especially like to crumble the meringues on top of the ice cream for an extra crunch.

This is just one way to use left over egg whites. This recipe requires only five egg whites, just the amount you’ll have left over after making the Mexican Hot Chocolate Ice Cream recipe.

Flaming Tortillas is dedicated to bringing the best of Latin cuisine, culture, and food news to your kitchen table. It features what’s in season right now,  favorite recipes from all over Latin America and fresh cultural Latin events around the country. Follow us on Twitter and get the latest news on Facebook.