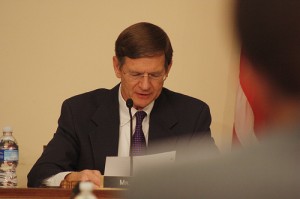 Lamar, where did you go wrong? You were such a sensitive fellow when we worked together 30 years ago.

You’ve always been an anti-immigration advocate but as you gain power in congress, you seem to be getting crankier and more self-righteous, not (as you say) more American. Now, you add insult to injury by opposing the Dream Act.

Whatever your motivation, your position strikes me, and many other loyal Latino Republicans like me, as needlessly harsh and insensitive. It doesn’t help the image of the Republican Party in the eyes of the growing Latino electorate who will either make us or break in the upcoming elections.

What you’re doing is defending a bad law that punishes good people.

Keeping the current broken immigration policy is a lousy idea. We’ve had lousy ideas before. Take Prohibition for example. High-minded moralists thought it would be great to pass a law to prevent people from drinking liquor. But when it proved to be a bad idea, we got rid of it. When the law was recanted, no one asked, “How are going to punish the millions who drank liquor illegally for years?” Instead, we rewarded those who had knowingly violated our laws for by giving them total amnesty.

Why was that OK? Maybe because “we” got the amnesty, not “them”.

We gave amnesty to American soldiers who left for Canada to avoid fighting in Viet Nam. Ronald Reagan gave amnesty to 3 million undocumented immigrants in the 80’s. In time, those immigrants became productive and contributing citizens. President Reagan’s wisdom on this issue lent the Republican party an image of understanding and sensitivity.

That image was good for Reagan and good for our party. It helped him attain 37% of the Latino vote in ’84, and created a base that grew to 44% for President George W. Bush in 2004. In fact, the Latino vote was the deciding factor in Florida in 2000 when Bush received 6,000 more Latino votes than Al Gore. And as we all know, Bush was a pro-immigrant president.

We need new immigrants for many reasons. One reason is to keep us young, vital and growing. Another reason is do the work we don’t teach (and don’t want to teach) our own children to do.

We call the workers criminals for taking jobs. But we don’t call ourselves criminals for offering the jobs.  We’re complicit in this thing, so it’s time we owned up to it.  We’re 50% of the “criminal” act.

You make a good point when you say that the American people want Congress to focus on creating jobs and getting Americans back to work. But that doesn’t mean we should choose to turn our backs on millions of good, hard-working people we lured here with the promise of a better wage.

Something else you say is true. For the past 22 months the unemployment rate has stayed around 9 percent while seven million “illegal” individuals are hard at work. But do you honestly think an unemployed autoworker in Michigan (used to earning $40 dollars and hour) would move to Southern California to pick grapes in the hot sun for 8 bucks an hour?  Think again.

By opposing the Dream Act, you would deport thousands of high school and college students willing to serve in our military, earn a college degree and do us proud; to a country most don’t remember and haven’t even visited. And more importantly, why would we waste that kind of talent and commitment at a time when America needs it most?

Granted, their parents came here without papers. Still, why not show a little compassion and recognize those parents for contributing to our economy for years with their hard, tireless work, for the taxes they’ve paid and for the social security benefits they’ll never receive? Why not recognize them for bringing up kids who would obviously make great Americans?

A stable American economy requires that we add at least 3 million new immigrant workers a year. Still we issue only 400,000 visas. What kind of sense does that make? We create “criminals” by continuing to issue fewer visas than the workers we need. By the way, don’t let the 3 million figure scare you. It’s only 1% of the population. That percentage of new immigrant influx, relative to our population, hasn’t changed in a hundred years.

My advice is vote for the Dream Act. Then fix immigration. Don’t do it for the goodwill it would earn for the Republican Party among Latino voters in upcoming elections. Do it because it’s the American thing to do. Do what Ronald Reagan did. Give them papers. Make them legal. Give them amnesty. If we have no illegal workers, we have no criminals. With no criminals, we have no issue to quarrel over.