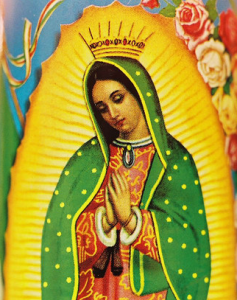 You know you’ve heard the story before. A grandmother in a faraway place has found La Virgen on her tortilla or her window or her ceiling or wherever it is that she found her.

Don’t pretend like you haven’t looked for things shaped like La Virgen before! It’s all a part of our culture, but because it’s also a recurring and hilarious part, we wanted to round up the list for you.

1. A Tortilla – This is one of the most common ones, close second to Jesus on a piece of toast.

2. A Tree – I wrote about this one when I was a reporter on the border, but I’m not the only one.

3. Windows – Not just stained glass windows, but office windows or apartment windows or car windows (no, car hoods with Guadalupe murals do not count!)

4. Oil Stains – I’ve heard this one several times, oil stains in driveways or the rust on cars. I guess because of how oil moves in circles it’s a likely candidate.

5. Water Damage – Whether it’s a puddle or other water damage, water can also create a Guadalupe image.

Thanks to Larry for the tip!