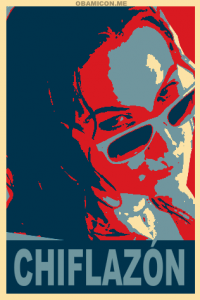 Because my mind works in strange ways, and because I can’t help myself, I usually pepper my English with Spanish even when I’m hanging out with non-Spanish speaking friends. I have to say I’m lucky to have great friends, because usually they just ask what I mean, or ask me to explain the concepts or words to them, but the one I’ve had the hardest time with — even with my Spanish speaking Latino friends — is chiflazón or chiflado/a.

Apparently, it’s a very malleable concept, which I think is incredible given how vast and rich culture can be. What struck me, though, with this particular word is how much one can invest in a concept and come to believe it to be universal — yet be so mistaken.

To me, growing up, chiflado (or chiflada, in my case) was a way to describe a whole host of sentiments, but the best direct translation I can come up with is “spoiled,” in the sense of “stop acting like a spoiled brat” but with a humorous and silly twist to it. As a kid, my parents, grandparents, tías and tíos would apply the word to me when I was being silly mostly, but also to other peoples’ kids when they were acting like spoiled brats.

The context and the tone of voice all were really important for deciphering the exact meaning.

Enter the rest of the world, and I come to find that even other people with Mexican families, let alone to mention people from Perú or El Salvador, have entirely different understandings of this world all together. I was surprised, when I looked it up, to find that it basically means mad, crazy or nutty, which is what my friend from Perú t0ld me it mean. It can also mean to whistle, as other Mexicans have told me. Or, it can mean nothing at all, which was the case with several Salvadoran friends of mine.

I guess my point is that culture is often something that we carry around wholly and uniquely inside of ourselves. For example, even though to my Salvadoran friends the word meant nothing, it does now, because they met me and understand the way in which I use the word. It’s amazing, isn’t it? Culture can be such a powerful and yet invisible thing, changing from family-to-family, country-to-country, and even from word-to-word.