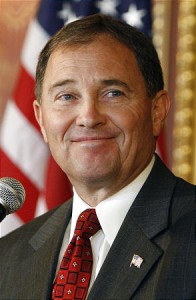 Utah Gov. Gary Herbert (R) defended the guest worker program that he signed into law earlier this year after the state’s legislature passed it as part of an overall immigration package against GOP critics.

The guest worker program passed in Utah would allow for undocumented immigrants to work legally in the state. Two Republican leaders on congressional committees that deal with U.S. immigration matters strongly oppose the program and claim it is unconstitutional.

U.S. Rep. Lamar Smith, a Texas Republican who heads the U.S. House Judiciary Committee, sent a letter to U.S. Attorney General Eric Holder this week urging him to sue Utah for approving the program.  He favors strict immigration policies and said that, “it is hypocritical of the Justice Department not to take legal action against Utah while it wages a court battle against Arizona.”

“Congress should focus on the problematic immigration system instead of focusing on Utah,” Herbert said.

“I don’t want to see federal subsidy dollars go to Utah if they’re going to defy federal laws,” he stated.

Many states have delayed on moving their immigration proposals and are waiting to hear the results of Arizona’s ruling.  However, Utah’s governor and legislators decided to move forward—supporting the guest worker program and passing laws that include enforcement and the need for immigrant labor.

Herbert criticized Smith’s letter to Holder, calling it a “typical Washington-attempt to deflect criticism that comes from Washington’s abject failure to address immigration, then sue a state over something that won’t even take effect for two years, rather than use those two years to do something positive.”

“Instead of throwing rocks at Utah, Congress should get off the sidelines, into the game and actually do something,” Herbert added.