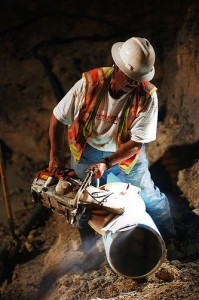 So lets put another myth to rest, the one that says that undocumented workers don’t pay taxes.

First of all, lets agree that we understand the superficial error in the statement – no one escapes paying taxes, unless you’re dead or a multi-millionaire and can afford the loopholes. The idea that an entire segment of the population, more than 50 million strong, could somehow pass undetected by the IRS is laughable.  Second, let’s make sure we understand a basic truth: everyone pays taxes as they go about their daily lives. We pay sales taxes when we buy groceries; transportation taxes when we get license plate tags or buy gasoline; property taxes when we pay our mortgage or our rent.

Even the undocumented, who live among the shadows for fear of being detained, pay their share t0 the government treasury.

That’s easy to say, so I’m glad that the Immigration Policy Center studied how the undocumented workers and their families pay local, sate and federal taxes , and then calculated the total for 2010 -it puts a concrete number on a flimsy idea.

Overall, in 2010, the undocumented payed $11.32 billion in taxes – that’s billion, with a “b.” California and Texas lead the list of states ranked by their undocumented tax burden. In 2010 they paid $2.7 and $1.6 billion respectively.

These figures should be kept in mind as politicians and commentators continue with the seemingly endless debate over what to do with unauthorized immigrants already living in the United States.  In spite of the fact that they lack legal status, these immigrants—and their family members—are adding value to the U.S. economy; not only as taxpayers, but as workers, consumers, and entrepreneurs as well.

Another thing that people need to keep in mind is that in order to pay taxes you have to have a job. So the idea that the undocumented come to the US to loaf on the government’s dime is beyond serious consideration.

And here’s something that’ll turn the stereotype in its head: half of the undocumented in the US pay income taxes – income taxes!

If you want to see a state-by-state breakdown of taxes paid by undocumented workers, check out the table on the IPC post.