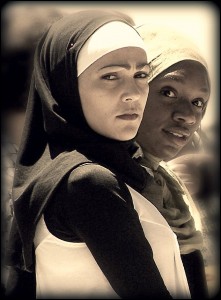 Re-visiting the Past: Ancestral Memory of Islam

Although many U.S. Americans of all ethnicities are embracing Islam, I often wonder if ancestral memory plays a role in the number of Latino/as embracing the faith of Islam. Latino/as may be first or even third- and fourth-generation in the U.S., and many more of are indigenous to the Southwest.

While Latino/as embody an ancestral mix of Indigenous, Spanish, and African blood and have been referred to as a “cosmic race” because of the roots in these three ethnic cultures, their ancestral mix of religious cultures is not talked about as much. From the geographic branches of their Spanish and African heritage, many Latino/as have a religious mixture that includes the three Abrahamic faiths—Judaism, Christianity, and Islam. All three religions have a long history in Africa, particularly North Africa, and a long history in Spain, specifically southern Spain.

Thus, the ancestral memory of Islam for many Latino/as who feel urged to convert to Islam may be rooted in four types of ancestors: 1) with a Moorish Muslim ancestor in Spain between the years of 711 and 1492 when the North African Moors ruled Andalusia, Spain; 2) with African captures, many of whom practiced Islam, who were taken to all parts of the Americas as slaves; 3) with amorisco ancestor who feigned Christianity and blended in with the mass of Mozarab Spanish migrants from Andalusia (approximately 36.9% of all Spanish migrants) who arrived in the Americas between 1493 and 1600, and 4) with Indigenous ancestors who were introduced to Islam by both North and West African traders and runaway African slaves (cimarrones) with whom they built and cohabited in freetowns or palenques.

With all the possible sources of the memory of Islam within the Latino/as community or on individual bases, one cannot ignore the more obvious roles Islam has played in naming practices and the Spanish language itself. Latino/as use given and last names that are Arabic, Arabic-derived, or reflect figures in Islamic history.

Just a few examples are: “Omar” (an Arabic name and famous figure in Islamic history means “one who lives a long life”) is a name that is common among Mexican-Americans in my area of Southern California; the surname “Medina” refers to an Islamic holy city in Saudi Arabia and also to center of a town (downtown); the Mexican city of Guadalajara is an Arabic term (Oued al-hidjara) meaning “the river of rocks”; the Spanish word “ojalá,” which is “nshaAllah” in Arabic or “if God wills” in English; and the scores of other words in Spanish that are derived from Arabic (e.g., granadilla,alfombra, algodon, sofa, alberca, almohada, camisa, etc.).

The Search for Peace and Tranquility

Many Latino/as have left the Catholic Church for Pentecostal Churches, Seventh Day Adventist Churches and Kingdom Halls, but the rising number of Latino/a Muslims is a testament to the universality of the faith of Islam and to the struggle among Latino/as to find inner peace and tranquility by following a religious path that is not as common as others in the community.

Latino/as whom I know have converted to Islam for many reasons: the absence of intermediaries like a priest, Jesus Christ, the Virgin Mary or la virgin de Guadalupe, santos, santeros or the spirits of dead family members who are remember in altares. Many Latino/as see it as a breath of fresh air that they can be their own religious teacher in the absence of one and that they can have a direct relationship with Allah at any moment and in any place. Although there are no intermediaries in Islam, it is not too much of a stretch for Latino/as to accept Islam because it does accept and protect the roles of Jesus, the Virgin Mary, and all the similarities in prophets and messengers beginning with Adam and including Abraham, David, Moses, Lot, Enoch, and others. Another similarity that Latino/a converts notice is between the Catholic rosary beads and the tasbih or dhikr beads used by many Muslims to keep count of supplications.

The challenges of being a Latino/a Muslim most obviously come in the form of familial confusion and rejection and the loss of “friends.” For many Latino/a families, Catholicism is so ingrained to the point that it is sometimes indistinguishable from Latina culture, especially by the older family members who see Catholicism as part and parcel of being Latino/a. For this reason, some Latino families feel a deep sense of cultural and familial betrayal when one of the family members is exploring or, worse yet, choosing to embrace Islam. It can be seen as a total rejection of the heritage and not simply as a question of religious re-affiliation.

For example, my best friend, who is Cuban American, converted from Santería to Islam in 2002. Her mother, a santera, took her daughter’s conversion as a complete rejection of her family and a renouncement of her Cuban identity. However, nothing could have been further from the truth. My best friend continues to love, eat, sing, write, breath, and celebrate her Cuban culture and family even with continued rejection from family; her Cuban flame has not been extinguished by the wind of Islam. Although her story does not appear and my essay focuses on challenges of racism and Islamophobia in the new book, I Speak for Myself: American Women on being Muslim (White Cloud Press, May 2, 2011), I encourage Latinos and US Americans of all ethnicities to learn more about the great experiential, ideological, and ethnic diversity by reading the collection of 40 essays by 40 women working on coming full circle in their own ways.

Jameelah Xochitl Medina is an educator, a business owner, a published author, a poet, an artist, and a student. She first began writing poetry at 12 years-old, and has been drawing since 2001. Jameelah is the author of The Afro-Latin Diaspora: Awakening Ancestral Memory, Avoiding Cultural Amnesia published in 2004, the owner of Hijabified 24:31 line hosted at Cafepress.com, and the owner of The Medina Academy of Overachievers. Jameelah’s research and activism has won her the honor of being listed in Oprah Magazine as one of 80 women leaders of the future, nominated by the White House Project.