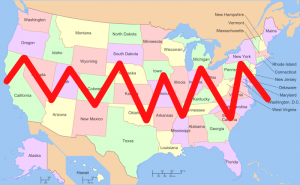 As we reported last week, redistricting in places where Latinos pushed most of the growth (like Texas), are getting their redistricting fights on. Now The Atlantic reports that this already complicated (and dare I say telenovela-esque?) fight is about to get even more complicated because of tons and tons of money pouring in on both political sides to aid each party in getting what they want out of redistricting. According to The Atlantic:

Lawmakers will be able to raise unlimited piles of cash from anonymous donors to help redraw congressional district maps and then defend those maps in court, thanks to a decision by the Federal Election Commission. Democrats aim to raise $12 million in soft money, while Republicans are gunning for $20 million–each with the goal of redrawing district lines in a way most advantageous to their electoral chances. But there’s a fight within the parties too, The New York Times‘ Eric Lichtblau and Raymond Hernandez report. Individual legislators are hiring their own lobbyists to help protect their seats.

This is the first battle that will be affected by the FEC’s decision last year that parties could raise soft money for these battles. The FEC decided that money raised for redistricting did not directly affect elections, so it was outside the scope of campaign finance law.

Think about all of that money. Millions and millions of dollars not going to help the hungry or the unemployed, but rather, to influence where lines that will be affecting the hungry and unemployed will be drawn.

Ideally, since Latinos are the reason for much of the changes in population in much of the country, Latino communities should be adequately represented in redistricting. But we don’t live in a perfect world. Which is why you need to get involved in this fight, here’s some information on how you can.