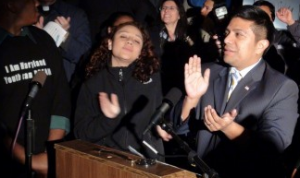 The Senate in Maryland passed a bill on Monday night that will allow undocumented students to pay in-state tuition, raising their chances of earning a college education in the state.

The 27-20 vote was primarily split along party lines, with Democrats voting in support and Republicans voting against it.

Elated cheers of “Si se Puede, Si se Puede!” (Spanish for yes we can) erupted outside from the hundreds of students that showed up to rally in support of the bill after the vote was announced.

“(The) students are asking for an opportunity to make life better for themselves,” Sen. Victor Ramirez, an immigrant himself and the bill’s sponsor, said. “Voting against this bill won’t solve any issue you have with immigration.”

Under the bill, only students who attend a Maryland high school for at least three years will be granted in-state tuition and they will also have to attend a community college in their high school jurisdiction  first before applying to a four-year public college or university.

The students will also have to prove that their parent, legal guardian or they paid taxes up to three years before entering college.

Ramirez, who is also the state’s first Latino state senator, was visibly moved while addressing the crowd of supporters.

“I’m very proud of them because they haven’t given up. They’re very resilient, and I know they’re gonna do great things — that’s what the American dream is about.”

The bill will now go up for a vote in the House of Delegates.