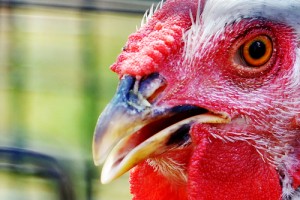 My father grew up in a small municipality by the name of La Rivera, Jalisco.  At the time, there was nothing to do there, and there is nothing to do there now. The only thing to be done is leave and stay gone. In the meantime, my father was raised around goats, chickens, donkeys and horses; he claimed his first job was to take freshly laid eggs to the market and see what he could get.

He would pass by the drinking holes and be awestruck by the glory of the winning gamblers who would prove triumphant in cards, dominoes and horse racing. However, the winner above all winners was the one who fought roosters. Those particular winners would stand around buying multiple rounds of drinks – meanwhile the losers mourned the death of their feathered gladiators. This made an impression on my father, although he knew he would catch a beating from my grandmother had he been caught there instead of selling the eggs. But no beating could ever chase that illusion of the big winner from my father’s mind. All he needed was the right bird.

My father gave up looking for the right bird though, trading it in for the supposed normalcy of wife and kids. He worked all of his life, always chasing his vices. They eventually caught up to him in 1998, when my father became gravely ill. He had recently retired from working more than three decades for the railroad company. Hard labor, hard drinking and hard living had destroyed his kidneys to the point where he became dependant on a machine to help him regulate what he once took for granted. He lived his life awaiting his next session of dialysis every Tuesday, Thursday and Saturday.

He would always come home tired and sigh heavily with the knowledge that the next treatment was just around the corner. He could never relax, mainly because once he became ill, he had to give up alcohol and tobacco – the things that relaxed him the most.
My father grew to embrace his boredom. He would spend his time on the porch, reading the newspaper and befriending the stray animals he encountered. He came to adopt seven cats. He would feed them and playfully caress them while he dismissed my mother’s objections. The blasted felines did not trust anyone else in our household and would only emerge when my father sat on the porch.

The proudest moment of my father’s life was when a big, ugly bird came to the house. It was an unfriendly specimen to the point where the mailman would not deliver mail unless the thing was safely tucked away inside of the house. Although it chased the living lights out of any of us, pecking at our ankles as it let out a savage cry, the animal showed an extreme sense of loyalty to my father. My father took pride in the notion that the bird would rest at his feet, so he decided he would embark on a new journey. He was going to become a cock-fighting trainer.

He embraced his new life as a trainer although he had no real connections to the cock-fighting community. Although he had friends, acquaintances, and neighbors with roosters, no one wanted to fight their household pets. My father would bully them with his pet bird in order to get them to agree to some kind of fight – which never came to fruition. However the lack of fights did not deter my father, as he always in training mode. He would use the family to help him train his clawed fighter. He would cheer it on as it chased us out of the house while we went to get ice cream. I still remember how badly he cut his hands when he tried to attach razor blades to its talons.

It was as sad as it was humorous.

Then the day that broke my father’s heart came. He searched high and low for his feathered champion and was unable to find it in all the usual places. He was about to give up when he finally found the bird underneath the house keeping a nest. The fighting machine turned out to be a hen. My father decided to tell his friends, acquaintances and neighbors that his contender had been stolen by thieves with an eye for talent – in the middle of the night. No one spoke of the incident, except to make fun of my father’s battle wounds. The hen had sliced his arms up pretty good and now it was gone, disowned by my father, never to be seen again.