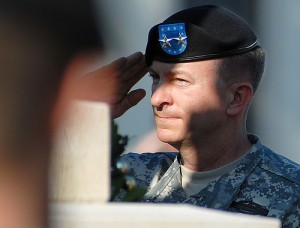 According to an independent report prepared for the US Congress there is a need for more and better integration at the highest levels of the US military. The report counted senior officers in U.S. active-duty and found that 77 percent are white and only 5 percent are Latino. Further breakdowns look like this: 8 percent of active duty senior officers are black, 15 percent are women.
The goal of the report is to paint a true picture of the officer level makeup and work to have it reflect that of the enlisted ranks and American society as a whole. Not that this is news, there is work to be done at all levels and areas of public and private institutions. But it helps to have an official idea as to how much work is needed.
According to the Atlanta Post:

“It is no surprise that the armed services have been slow to fully embrace the changing face of America — gays still cannot officially serve openly in the military… However, where other industries have felt more social pressure to diversify, military culture is often untouchable by the civilian world.”

The thing now is to make sure that this report does not get shelved and forgotten like so many other reports that are done, paid for, make their way to Congress and then languish in a forgotten stack.
Action to bring more Latinos into the highest ranks of the military is needed if only for the sake of the hundreds of thousands of Latinos that have served in the armed forces throughout the history of the United States, for their families and if nothing else for the sake or parity. It would be good to know that the people sending front line Latinos into battle in defense of the US are Latinos as well.
I’m not going to bother speculating about manufactured wars or senseless military action…that’s fodder for another day.

[Photo by US Army Africa]