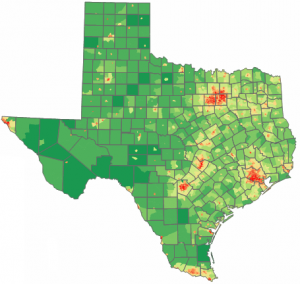 Former Census Director and Texas Demographer Steve Murdock has gotten a lot of flack over a quote misattributed to him, “It’s basically over for Anglos,” in Texas. National Institute for Latino Policy reached out to Murdock for clarification. Here’s the quote:

Two of every three Texas children are now non-Anglo and the trend line will become even more pronounced in the future, said Murdock, former U.S. Census Bureau director and now director of the Hobby Center for the Study of Texas at Rice University.

Today’s Texas population can be divided into two groups, he said. One is an old and aging Anglo and the other is young and minority. Between 2000 and 2040, the state’s public school enrollment will see a 15 percent decline in Anglo children while Hispanic children will make up a 213 percent increase, he said.

What Murdock in fact said, he told NILP, was:

The quote that it is “basically over for Anglos” was taken from a comment from an audience member at a Mexican American Legislative Caucus Meeting in Austin where I was a speaker.  An audience member said, “it sounds to me like it is basically over for Anglos” to which I responded that, “Well I guess that is one way to look at it but I am talking about the likelihood that Anglo populations will again show extensive growth.”

I went on to point out that Anglo birth rates have been below replacement for some time and that the main source for Anglo immigrants would be Europe but that Europe’s population is growing slowly and is the only region of the world projected by the United Nations to show population decline between now and 2050.

My comments related to differences in income and education were made to indicate that legislation such as that to eliminate scholarship programs for poor youth (who are primarily minority in Texas) was a mistake and that data for Texas (with 2 of every 3 persons under 18 years of age being non-Anglo in 2010 and with recent growth in public elementary and secondary school populations from the 1998-99 to 2008-09 school years showing that Anglo school children decreased by over 130,000, African American children increased by about 100,000, Asians by about 74,000 but Hispanic children in public schools increased by about 745,000), clearly showed that the future of Texas is tied to its minority populations, particularly Hispanics.

I closed making the point that I often do that “Texas needs to ensure that all Texans have the skills and education to be competitive in the increasingly international economy and that the future of Texas will be increasingly determined by minority populations, particularly Hispanics, and that how well they do (in educational, economic, and other terms) is how well Texas will do.”

I hope this helps to clarify things.  I believe anyone who doubts where I stand could ask Hispanic leaders in Texas with whom I have worked closely for years.

There is more than one way anyone can respond to quotes or information, but Murdock over the years has been consistent in his message that Texas is moving towards a majority Latino state and that the powers that be were going to have to prepare for this. That’s it, he doesn’t add a liberal or conservative or racist or reverse racist tinge to his message. I’ve been listening for more than 5 years, and it’s stayed the same the whole time. What the rest of us do with this information, however, is a whole different matter.