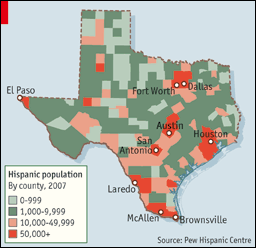 [Editor’s Note: This post was written by Sylvia Manzano originally appeared in Latinovations and is re-posted here with permission.]

The U.S. Census Bureau recently released the Texas state file including race and ethnicity details. Latinos now account for 38% of Texas population (up from 32% in 2000) and grew by over 100% in 17 counties. While demographers and casual observers knew the Texas numbers would be big, the details are still striking to see: 65% of all growth from 2000 to 2010 can be attributed to Latinos and 95% of under 18 increases also are Latino driven. The share of Latino children is the perhaps the most telling data point of all – there are some forces stronger than politics and this demographic shift cannot be legislated or drawn out of existence. With re-apportionment upon Texas now (and several other states) it is worthwhile to consider implications demographic change has upon representation and democratic governance.

The data suggest that it would take a concerted effort to keep Latinos from influencing existing and new districts (38 congressional districts total) in different ways. First, the number of Latino candidates and elected officials is likely to increase at all levels of government. And yes, in both parties. Despite the fact that Latinos have been twisted into a wedge issue that deeply divides the GOP – a division of their own creation – Latino Republican candidates have steadily gained seats over the last ten years. Indeed, the words “Latino Republican elected official” no longer describe an isolated Florida-based, Cuban American phenomenon. Among Democrats, the talent pool is deeper and crosses several generations. The number of experienced Democratic Latino office holders that can run competitive races is larger and continues to grow each election cycle.

Most importantly, state residents are increasingly Latino. Democratic (small “D”) government calls for elected officials to represent constituent preferences. Representing district residents means attending to residents’ needs and demands, not just party activists or contributors. Because there are more Latinos in all metro areas (and many rural clusters too) there should be a stronger Latino voice at the table no matter what the new 2010 districts designs look like. In most states we would be hard-pressed to design a district where the Latino population decreased or remained stable. For this reason, it is fair to say that all new districts (especially in Texas) are Latino districts. Their share is larger – in 17 Texas counties over 100% larger — thus there is a greater imperative upon elected officials to represent Latino policy preferences. We know the magnitude of this imperative will only grow into the next decades.

Parties need to quickly determine how their issue agendas and candidates will proximate Latino political preferences. A recent LatinoDecisions study found Latinos want to participate, but are often frustrated by unresponsive parties and representatives. State-level officials and party operations can demonstrate their respect for Latino constituencies by designing districts with fair representation goals (as opposed to political posturing) guiding the process. A related LatinoDecisions survey found immigration remains the most important issue to Latino voters around the country. Action (not symbolic gestures and votes) on immigration reform would be the clearest signal national parties and elected officials could offer their large Latino constituencies to demonstrate they are taken seriously.

Sylvia Manzano is Assistant Professor of Political Science at Texas A&M University in College Station, Texas. Her research focuses on Latino representation, participation and state politics. Her work has been published in Political Science Quarterly, State Politics and Policy Quarterly, Urban Affairs Review and other academic outlets. She is a contributor at LatinoDecisions.com, a research firm specializing in Latino public opinion research. A native Texan, Manzano received her PhD at the University of Arizona.