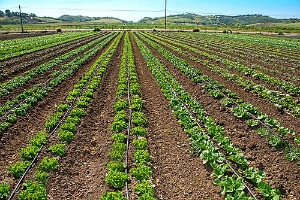 It only makes sense, if you give a traditionally agricultural community in its origins an opportunity to expand its entrepreneurial energy. And it flies in the face of all the stereotypes.

According to the orlandosentinel.com

Hispanics claim the highest rate of new farmers in the nation, followed by Asians, said Tirso Moreno, general coordinator for the Farmworker Association of Florida. Florida also has seen similar growth in the past decade, he said.
Florida has more than 3,100 farms and agriculture-related business where Hispanics are the principal operators, making up almost 7 percent of the 47,500 total, according to the 2007 Census of Agriculture, the most current report by the U.S. Department of Agriculture.

Whats happened in many places across the country is that white farm owner/operators are selling their businesses as they get older and their children have no interest in staying on the family farm. But what’s not changing are the challenges to operating a small family owned farm. Pressures from corporate farms and the issue of farm subsidies and agriculture legislation to come are front and center for more and more Latinos. And at the same time Latino farmers have introduced a variety if crops to the market. It’s a double-edged problem.

Minority farmers have even introduced new fruits and vegetables to the U.S. market. For example, Hispanic and Caribbean farmers provide red turnips and different varieties of chili peppers and greens, (associate professor in the Sustainable Agriculture Department at the University of Florida, Mickie)Swisher said.
Swisher, director of UF’s Center for Organic Agriculture, conducted a study for the USDA on small-scale Hispanic farmers and ranchers and their needs. It focused on California, Florida, New Mexico, Texas and Puerto Rico, which have the highest number of Hispanic farmers.
While the farmers were mostly second-generation Hispanics and spoke English, Swisher said, they were unaware of grants and other government resources available.

My friend Rudy Arredondo, president of the National Latino Farmers and Ranchers Trade Association, has been working on these issues for many years. I met him several years ago while doing Ag issues work for the William C. Velásquez Institute.

His decade-old organization, started after the nation’s number of Hispanic farmers jumped by 52 percent, is trying to change that. He helped write the 2008 Farm Bill, which added money for outreach and grant and loan programs for minority farmers. In November, the USDA awarded his association a grant for more than $300,000 to improve Hispanics’ access to federal programs and help them succeed.

I saw first-hand the energy and concern of Latino farmers for their land and their families.  A little known fact is that  water and soil conservation improves when small family owned farmers work the land. We all need to give them the help and respect they deserve.