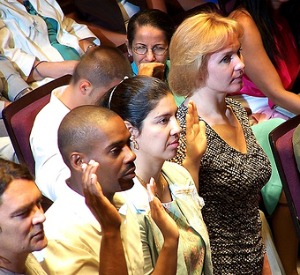 Here’s a part of the immigration debate that gets little play in the general, national, debate: the infamous ‘line” that immigrants must stand in in order to enter the US legally is, in some cases, 22 years long.

In all the time that I’ve been covering and writing about immigration issues I had seldom seen stories about that wait as an integral part of the national immigration conversation. Whenever I though about immigration reform the decades-long wait was at the top of my list of things that needed reforming.

Lee Davidson, of the Salt Lake Tribune, has a great story (finally!) about it.  The last I had heard was that the wait for Mexican immigrants was 12 years. Davidson writes:

“For instance, some Mexicans arriving legally now first applied 18 years ago, according to the State Department. The U.S. legally admits about 90,000 Mexicans annually, while another 300,000 to 500,000 come illegally.”

He follows-up with a brilliant quote/question:

The quota for family related visas, according to the story, is 226 thousand. Last year alone 4.2 million people applied for family visas. You do the math.

I’m not advocating for opening the gates and letting 4.2 million people in every year, and those numbers build a compelling argument in favor of stricter border security, but what I am saying is that we can’t use the tired “get in line” idea to make a point on immigration. It’s not a line, its a sentence. And it’s hypocritical to expect people to wait 18 years when their need for sustenance is immediate.

There is no easy answer, but if we don’t include all of the failures of our present immigration system in our debate we’ll end up with false arguments.

“Shorten the line” should be said as often and as emphatically as “stand in line.”