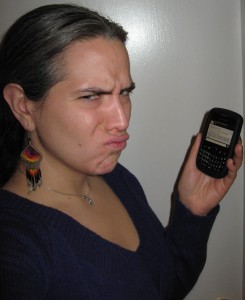 I’m a pocha, loud and proud, and part of my pocha heritage is that I comunicate in Spanglish. Everywhere. In letters, in conversation, in emails, in cards and, most recently, in text message. But, BlackBerry hates my Spanglish and is constantly trying to correct it. In fact, it often changes my Spanish words to random English words when I try to send my messages, rendering them practically intelligible.

This is not just a BlackBerry problem, however.

As we’ve hammered on before on NewsTaco, Latinos are making up an increasingly large part of the populace. In short order, that means names like “Smith” are no longer going to be the go-to “American” surname for purposes of generalizing; something Victor Landa pointed out recently. Accents are going to become more common, as will non-English words in the American lexicon. Will technology catch up? This is not a short-fix Y2K problem, but a long-term issue that cell phone companies, Internet providers, banks, everyone will have to accomodate.

But back to BlackBerry. Let me give you a few examples. The phone turns “gracias” into “grass,” “mañana” into “banana,” “mucho” into “macho,” “chingado” into “changed,” “oyes” into “ones” and “amor” into “amok.” The latter, in particular, could probably create some problems along the way. The Palm phone I used to own would freak out in Spanish, too, but wouldn’t attempt to change my words via spellcheck before sending a message, which considering how much Spanglish I use, is really annoying.

Anyone else have this problem with their phones?