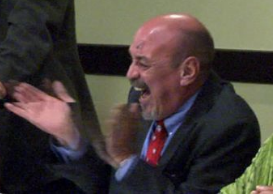 It’s taken a while to settle enough to write this.

I’ve been in a daze since hearing of Carlitos’ passing.  It wasn’t until the fog thinned, until I began to  think of what to write, that I heard Carlos’ voice in my head (not like a whisper, his voice was never a whisper)  say, “Are you going to write this or not!”

The last time I spoke to him he told me a joke. I had heard it before, from him, in about five variations. But that was that way it was with Carlos: variations on themes. I knew him long enough to know that. There will be plenty of things written and said about his work and career, many of us will remember him him as a friend, some of us though, can speak from a place where the two intersected.

“You know I’m a gourmet cook,” he told me one time. He had called me that morning raving about a taquer﻿﻿﻿ía on the South Side of San Antonio. “We have to have lunch there,” he said. He meant that day. We talked the whole time about tacos: their simple elegance and practicality. And true to form, politics was woven into the conversation, apropos of tacos, of course. His comment about being a self-taught gourmet cemented his authority about both.

He was an impeccable reporter, a good story teller and he could keep you on the phone for hours. He was genuinely excited about new media and digital storytelling. He bought video and editing equipment and was teaching himself to shoot and cut. He was fascinated by the community building capability of social media and thought it was both hilarious and interesting that the most comments he got on his Facebook wall was when he posted about huevos rancheros.

He was a proud father. He was a very proud father. We swapped kid stories through the years and were witnesses to the way our eyes lighted when we spoke of our children. He came in to my office at channel 60 one day and said “My daughter says she wants to be a writer,” she must have been six or seven years old at the time. “She takes after her old man,” I said. “I thought so too,” he smirked. “I told her I’d take her to the Express-News to see the press and look around.” Then he raised that iconic eyebrow. “She said no daddy, I want to ride ponies.”

“Pos hijo-e-la!” He pivoted and went back into the news room.

He was cantankerous. He was persistent. I knew because I was his news director for several years. You’d think he was in a bazaar when he needed more time for his commentaries. “You’ve got a minute and a half.” “I need two minutes.”

His piece would come in at two minutes. What was hilarious was that the first piece of advice he gave me when I started writing opinion columns was “never give the editors more than they asked for.  If they ask for 700 words give them no more and no less, that way you decide what you cut, and not them.” He knew that, seconds from air time, on television the rules were slightly different.

The thing about Carlos was that you always knew where he stood. You may or may not have agreed with him. And that was fine by him. But you could never say he was dishonest or disingenuous. He was fierce in his defense of human and civil rights. He took the mightiest to task. He made you think.

He liked to say that he and I were fired from the same two television stations. It was a good story. It wasn’t true, but I let him have it. I used to say he was a really nice guy, and he let me have that.

News Taco was our latest and last collaboration. He had great plans for this; we have them still. This will continue, with his spirit leading the way. Give us a day. We need it. And we’ll be back.

The last time we spoke on the phone he was on Mustang Island, laughing that a squall had caught him on the jeddy. He was planning on cooking his catch for supper.

The last thing he gave me was a variation of one of his old jokes. A skunk bumps into a possum in the forest. I’m sorry says the skunk. I’m tlacuahi, replied the possum. Remember Carlos’ laughter, and put it here.

[Photo cropped from original in mysa.com. I’m sure they won’t mind. If they do they can put it on Carlitos’ tab.]