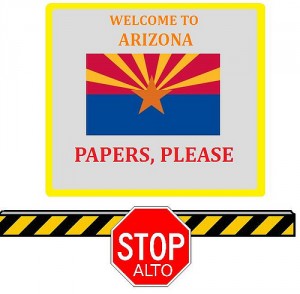 I wish it weren’t necessary to bring such things up, but we have to keep an eye on these developments. Arizona-type anti-immigrant laws are spreading like mala yerba.

The Associated Press is reporting that “some state lawmakers from south Oklahoma City have been pushing harder for tough immigration laws as the city’s Hispanic population has grown.” The push comes from legislators from areas that have seen the highest rate of growth in Latino population. One such legislator, newly-elected state Sen. Ralph Shortey, R-Oklahoma City, told the AP that he “plans to file legislation that would mirror an Arizona law requiring police to question the immigration status of people they suspect are in the U.S. illegally.”

A Latino member of the Oklahoma City School Board, David Castillo, calls the anti-immigrant push “growing pains.” “I believe that is what we’re going through in Oklahoma, especially in south Oklahoma City,”  he said.